Union agitates against no increase in minimum wage 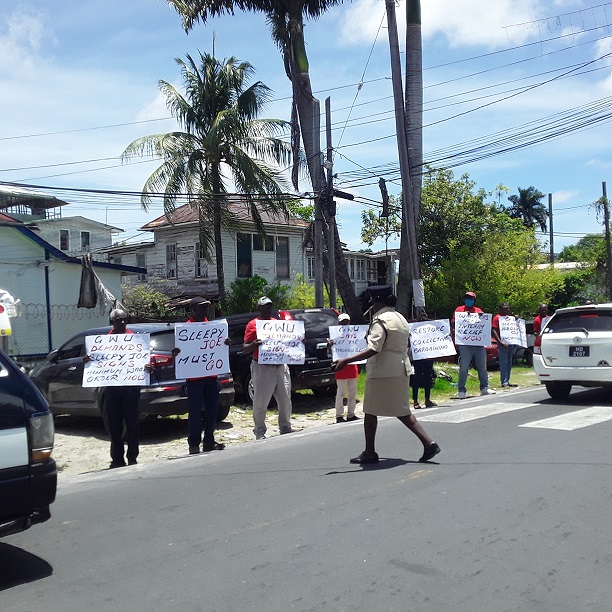 GWU members picketing outside the Ministry of Labour, Brickdam, Georgetown where the launch of Occupational Safety and Health month on April 1, 2022.

As the cost of living continues to increase, the General Workers Union (GWU) is continuing to press government to implement a two-year old decision by the Tripartite Committee to increase the minimum wage but Labour Minister Joseph Hamilton says the recommendation was still at Cabinet.

GWU members and the General Secretary of the Guyana Trades Union Congress (GTUC), Lincoln Lewis have been staging periodic picketing demonstrations in Georgetown to whip up public support for their demand.

President of GWU, Norris Witter said that in 2019, the Tripartite Committee during the administration of A Partnership for National Unity+Alliance For Change (APNU+AFC) had decided to hike the national minimum wage from GY$44,200 to GY$60,000 per month but that decision had not been implemented.  Mr. Witter said the Labour Minister had in April 2021 committed to sign the order but so far there has been movement and February 2022 had reported that Cabinet had accepted the recommendation and all that he had to do was to sign the order. “As the nation will know, the world will know, up to this point in time, as we speak, that order has not been signed to make good the commitment of $60,000 per month,” the trade unionist said. He hoped that the order would be signed soon to make way for a fresh round of negotiations because “the cost of living has risen exponentially” due to COVID and the Russia-Ukraine war. “One would have thought that what would have been a logical response by the Minister and the State was to address immediately the question of the outstanding minimum wage of $60,000 and simultaneously to recommence negotiations for a new minimum wage which would bear some relationship with the current cost of living,” he said.

Mr. Witter later told Demerara Waves Online News that the minutes of the last meeting on February 2, 2022 would confirm whether or not the Labour Minister’s commitment at the meeting held on January 5, 2022 to take the matter to Cabinet was honoured and what was the decision.

The GWU is concerned that the Tripartite Committee has met three out of 24 expected times since the Labour Minister took office in 2020.

Mr. Witter said plans are in the pipeline to write each union separately to seek their solidarity and eventually take the protest to other administrative regions. “Georgetown is just the start of what most likely will be a very prolonged struggle,” he said.

He said so far the GTUC and the Clerical and Commercial Workers Union have joined the GWU in the “struggle” and opens the door for other unions such as the Guyana Public Service Union (GPSU) to participate.