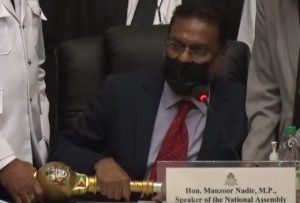 House Speaker Manzoor Nadir holding what he termed a replica mace while putting the Natural Resource Fund Bill to the vote while the traditional mace was taken away by a number of opposition parliamentarians.

Opposition A Partnership for National Unity+Alliance For Change Chief Whip, Christopher Jones and trade unionist Norris Witter are challenging the constitutionality of the Natural Resource Fund legislation since they believe it was not properly passed by the National Assembly due to the absence of the mace and a lack of consultation.

The High Court is being asked to order that that Natural Resources Fund Act 2021, subsequent orders and regulations; all actions taken by anyone, including the Minister of Finance and the constitution of the NRF Board are all null and void and to be of no force and effect.

Messrs. Jones and Witter are seeking a High Court declaration that the Executive’s failure to constitute the Human Rights Commission, a Constitutional Commission established under Article 154A of the Constitution is a contravention of the Constitution, and so the Attorney General must be directed to set up such a body.

Another order being sought is for the NRF to be replenished of any monies taken out of the fund.

Filed by Attorney-at-Law, Roysdale Forde on behalf of Messrs. Jones and Witter, the applicants want the High Court to declare that the conduct and/or proceedings of the National Assembly on December 29, 2021 in the absence of the mace violates the Constitution, Common Law, the constitutional values of the Rule of Law, Democracy, and Inclusive Governance, unwritten constitutional principles of the Rule of Law, and the Standing Orders of the National Assembly, illegal, null, void and of no legal effect.

Against that background the opposition politician and the trade unionist are asking the High Court to find that as a consequence the passage of the Natural Resource Fund Bill No.20 of 2021 is illegal, null, void and of no legal effect.”

Similarly, Mr. Jones and Mr. Witter are challenging the the holding and or continuation of the proceedings of the National Assembly on December 29″, 2021 with the use of a replacement Mace without any approved Motion to do so. In that context, they High Court is being asked to declare that the Natural Resource Fund Act is similarly illegal, null, void and of no legal effect.

Mr. Witter, who is a veteran Guyanese trade unionist and currently President of the General Workers Union, wants the High Court to declare that there was no consultation with stakeholders and citizens of Guyana which amounted to a clear violation of Article 154A of the Constitution which mandates that Human Rights enshrined in International Conventions set out in the Fourth Schedule to the Constitution shall be respected and upheld by the Executive. “Consequently the Executive in designing and formulating a Natural Resource Fund policy for Guyana is required and obligated by the Constitution and  Covenant on Civil and Political Rights to engage in consultation with the Stakeholders and Citizenry of Guyana,” the court document states.

Mr. Witter and Mr. Jones hope that the High Court will declare that the decision by the Speaker of the National Assembly to permit the  debate and or passage of Natural Resource Fund Bill No. 20 of 2021 without any consideration of the Petition submitted by Mr. Witter and certain other Citizens prior to the passage of the Natural Resource Fund Bill No. 20 of 2021 constitutes a breach of  his fundamental Human Right to political participation which encapsulates the opportunity to take part in the conduct of public affairs of Guyana which is guaranteed by Article 13 and or 154A of the Constitution and Article 25 of the Covenant of Civil and Political Rights; that the Speaker’s decision to permit and allow the passage of the Natural Resource Fund Bill No. 20 of 2021 without affording or permitting any Member of the Opposition, inclusive of  Mr. Jones to participate in the debate on the aforesaid Bill is against the constitution, law, unwritten constitutional rules and specifically a violation of the constitutional right to freedom of expression.

Several APNU+AFC parliamentarians had disrupted the proceedings of the National Assembly by blowing whistles, pacing around the Chamber, dragging the mace and taking it outside, and allegedly disconnecting the Internet and audio connections while the Finance Minister had been speaking on the Bill. The Finance Minister had been encircled by government parliamentarians during his presentation. APNU+AFC parliamentarian had later admitted to removing the mace because she had been fed up that calls for consultation about the Bill had been ignored.

Governance and Parliamentary Affairs Minister Gail Teixeira then put the Bill to a vote and it was passed by a simple majority.

House Speaker Manzoor Nadir had later told reporters that a replica mace had been used and that the Bill had been properly passed by the House.