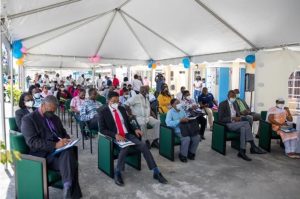 A section of the attendees at the Ministry of Labour’s launch of Occupational Safety and Health Month 2022.

Even as the Ministry of Labour continued to boast of an increase in the number of Occupational Safety and Health (OSH) officers, the trade union movement on Friday urged the involvement of the employers organisation and urged inspectors to enforce the laws.

The General Secretary of the Guyana Trades Union Congress (GTUC), Lincoln Lewis noted that the Consultative Association of Guyanese Industry (CAGI)-the employers’ representative in the tripartite system with labour and government-was absent from the process. “We don’t see the employers organisation,” he said.” If we can’t get the little things right, we would not be able to get the big ones correctly down the road so that I hope in future we correct the situation,” said Mr. Lewis, a mechanic by training.

The veteran Guyanese and Caribbean trade unionist, who is aware of many workers who have been injured or killed, urged that action be taken against employers who threaten staff who agitate against unsafe working conditions.  “When the workers stand up consistent with the law and say we will not work under it, you have some employers who say you have to go home or we suspend them and we do something to them,” he said at the official launch of Occupational Safety and Health month.

The GTUC General Secretary charged that the Labour Ministry was not equipped to go after employers to protect and respect Guyana’s human resources, even as he added that it was not sufficient to merely have a month of OSH activities.

“The labour department lacks the capacity to go and enforce the law and make sure that those employers respect what the law says and what the workers are being involved in,” he said. The trade unionist said businesses should not merely about earning revenue but also ensuring that the human resources are protected throughout the year.

Boasting that for the first time in Guyana’s history over the past 18 months, workers are aware that the Ministry of Labour has been paying attention to their rights, health and safety, Minister of Labour, Joseph Hamilton said his entity had been staffed with nine OSH officers and there had been no provision for succession planning. No, he said except for Region Eight (Potaro-Siparuni), the other nine regions have one or two OSH officers.  “We are coming from nothingness… That is walk, not talk,” he said. The Labour Ministry, he added, has been authorised to employ 21 more OSH officers. Mr. Hamilton said hundreds of workplace OSH committees have been resuscitated in the private and public sector over the past 18 months and businesses now know that by law there must be an OSH committee if they have more than 19 employees. “So for those who say glibly that they question our stewardship, I allow the people to judge. They are the best judge of what we’re doing here,” he said.

The Labour Minister said there are now 26 labour offices, up from 16, across Guyana.

The GTUC is the umbrella organisation for several trade unions such as the Guyana Public Service Union, Guyana Teachers Union and the Guyana Workers Union,  that represent government workers.

The Federation of Independent Trades Unions of Guyana (FITUG), whose affiliates include the Guyana Agricultural and General Workers Union, National Association of Agricultural, Commercial and Industrial Employees (NAACIE) and the Guyana Labour Union (GLU), sought to assure Guyanese that unions do not merely clamour for increased pay. “We in the Federation of Independent Trade Unions have always had health and safety as one of its prime objective and not only wages and salaries because we believe that a healthy workforce is a productive workforce,” said FITUG President Carville Duncan.

He also echoed the GTUC’s concerns that employers’ major focus was mostly earning profits. “As we look around, many employers, who also signed that agreement, have little interest in health and safety. They have more interest in gaining profits off the back of the workers,” he said. Mr. Duncan, who is also a veteran trade unionist, laid most of the blame at the feet of the Ministry of Labour. “…primarily because right here in this City inspections are not done properly and workers have to work under some very difficult conditions and even though protective clothing is enshrined in the agreement, it is not enforced,” he said.

Chairman of the Private Sector Commission (PSC), Paul Cheong said the business community was committed to health and safety and he called for ongoing training and safe workplace practices but he called on the Labour Ministry to conduct inspections to ensure workers and employers are not flouting the 1997 OSH Act and associated regulations. “The Ministry’s Occupational Health and Safety Department must provide better support to companies and businesses to complement what businesses are doing through regular visits to worksites to ensure companies and employees are operating in compliance with the health and safety regulations,” he said.

Mr. Earl Morris, Chairman of government’s National Advisory Council on Occupational Safety and Health (NACOSH) and OSH Training for CAGI,  predicted that the Council would have a lot of significant work to influence the development of regulations to keep pace with oil and gas, renewable energy, agriculture, changes in construction, mining and the population make-up of the workforce. “So we have our job cut out to ensure  that those industries are properly regulated through the laws of Guyana,” he said.