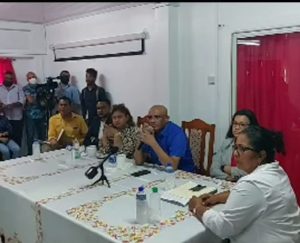 Vice President Bharrat Jagdeo on Tuesday flagged the fact that the Guyana dollar appeared to be strengthening against the United States (US) dollar in recent months.

He said the Dutch disease, a phenomenon that leads to exports becoming uncompetitive and traditional domestic industries being badly affected especially in new oil-rich countries, is “already happening here.”  “You don’t want that to happen here. You kill off the other areas of the economy and we become like most oil and gas-producing countries where they have a single sector that they rely on- oil and gas and when the prices change or they run out of oil and gas, the society implodes,” he said.

Instead, the Vice President restated that Guyana has opted to invest some of the oil revenues on improving infrastructure, health care and education as part of an overall plan to create non-oil jobs. He cautioned against spending “every single cent” on consumption as that could drive inflation.

The opposition People’s National Congress Reform (PNCR) on Tuesday recommended that government subsidises basic consumer items such as flour, cooking oil and rice, in the face of rising world oil prices due to Russia-Ukraine war.