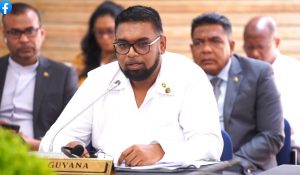 President Irfaan Ali has recommended that the 15-nation Caribbean Community (CARICOM) and the Central American Integration System (SICA) combine their efforts to maximise food production in the region.

He also proposed a joint meeting between the Central American Agricultural Council and CARICOM’s  Agricultural Ministerial Task Force “so that we can marry the priorities to establish a time-bound framework that is in keeping with what CARICOM has decided over the last two days.”

Addressing a joint meeting of the two blocs in Belize, he said efforts were already underway for SICA to participate in the upcoming Regional Agriculture Investment Conference scheduled for May 19 to 21.

With CARICOM already deciding to fully commercialise the agriculture sector and strengthen competitiveness to meet the food and nutrition needs of the region, talks have already begun with Honduras, Belize, Costa Rica and Guatemala in supporting CARICOM’s target to increase food production by 25 percent by 2025

Figures show that agriculture accounts for 25 percent of Guatemala’s Gross Domestic Product (GDP) and  50 percent of the labour force contribute to sugar, coffee, bananas and cotton, and Honduras employs 39 percent of the population in producing plantains, rice and beans. He said Central America as a whole  account for half of the region’s exports in agriculture and food production. “This tells us that the solution to food security and sustainability lie right in this room. What we require is the commitment and joint approach in addressing food security in the region,” said Dr. Ali who is responsible for agriculture in CARICOM’s quasi-cabinet.

He told SICA leaders that their countries’ competitive advantage are “almost identical” to those that CARICOM has identified to boost production and competitiveness. “This is a low-hanging fruit; very, very low-hanging fruit in which we can bring real benefit, real results so that the population of our region (can see) that we are no longer in prolonged dialogue and conversation but here is it that, as a joint region, we are prepared to put up an actionable time-table that we are going to open ourselves to accountability to the people in achieving the integration and food  security,” he said.

The Trinidad-headquartered Republic Bank has offered a US$100 million line of credit to governments for on-lending to farmers. Barbados’s Prime Minister Mia Mottley already expects the Caribbean Private Sector Organisation (CPSO) to propose additional resources at the Agriculture Investment Conference.

Meanwhile, President Ali and Guatemala’s President Alejandro Giammattei Falla have inked a memorandum if understanding for that Central American country to assist Guyana  revitalising the sugar industry, considering and recognising the significant role of the agricultural sector in achieving food security and economic development. Guatemala is a major sugar producer from which Guyana had once imported the sweetener for domestic consumption at a cheaper price to allow Guyana to satisfy its export markets and earn vitally needed foreign exchange.

2022-03-04
Denis Chabrol
Previous: La Penitence man arrested with $2.6 million worth of cocaine- CANU
Next: OPINION: Natural Resource Fund board -so much for inclusion, for representation