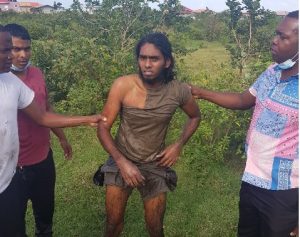 A prisoner, who escaped from the Lusignan Prison, was recaptured on Friday afternoon.

Kavin Singh fled on Thursday moments before he was due to appear in a virtual courtroom.

Director of Prisons, Nicklon Elliot confirmed that Singh was recaptured in the cane fields at Good Hope, East Coast Demerara, at around 3:50 pm by a Joint Services team.

He is on remand for two counts of illegal possession of a gun and ammunition, and robbery under arms.

A hunt was launched after Singh escaped whilst waiting at the institution’s virtual court compound.

Around 09:30h on Thursday, a prison officer uplifted seven inmates, including Singh, to attend court. Singh, who was foot-cuffed at the time, asked to use the washroom. Permission was granted and the prisoner went to use the washroom without supervision.

The prison officer said upon his return to the washroom, he discovered the inmate missing and an alarm was raised.

Checks were made and it was discovered that the eastern chain-link fence of the court compound was detached from the post.

Singh whose last known address is Lot 291 School Street, Grove, East Bank Demerara (EBD), was committed to the prison on December 6, 2021 having been charged with two counts of possession of ammunition and firearm, and robbery under arms.

Singh will be charged criminally for escaping lawful custody.

Meanwhile, the prison administration said it “would like to express thanks to the ranks of the Guyana Police Force and the public for their commitment and dedication that led to the speedy recapture of the prisoner.”