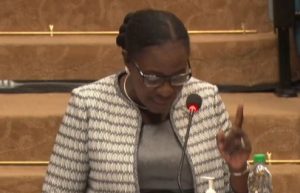 Shadow Education Minister Dr Nicolette Henry this afternoon confirmed that she will no longer be a member of Parliament, possibly paving the way for People’s National Congress Reform Leader Aubrey Norton to emerge as a parliamentarian and Opposition Leader.

“This is my final budget presentation in this Honourable House,” she said.

She thanked former President David Granger and the people of Guyana who afforded her the opportunity to serve Guyana.

“My friend and colleague Joseph Harmon for his unwavering support,” she said of the former Opposition Leader, Joseph Harmon, even as she struggled to hold back tears. “It is with those words that I part company and i concluded my contribution to budget 2022.

Dr. Henry also expressed gratitude to the Alliance For Change and its leader Khemraj Ramjattan but made no reference to the People’s National Congress Reform (PNCR) or any of its executive members in her  ‘thank you’ remarks.

Dr. Henry is one of the nine APNU+AFC parliamentarians , who was drawn from the top-up component of the list of candidates, that the PNCR Leader had consulted earlier this week in an effort to convince one of them to resign or he would have been left with no other option to recommend the recall of one of them to the Representative of the List of APNU+AFC candidates, Mr. Granger.