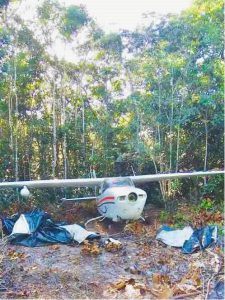 An illegal Cessna plane has been found in a canopy of forest near an illegal airstrip in Kuruduni, about 20 kilometres from the Kurupukari crossing, the Ministry of Home Affairs said Tuesday.

The Home Affairs Ministry strongly suggested that there was no trace of narcotics. “A search was conducted in and around the aircraft but no illegal substance was found in either the cabin or cargo space. Nothing was found in the immediate vicinity either,” the ministry said.

The Guyana Police Force and the Air Corps of the Guyana Defence Force have been called in to probe the circumstances that led to the plane, bearing Venezuelan registration marking, YV 506, being there.

Police station from the Mabura Station said they found the Cessna 310 plane on Saturday, January 29, 2022. The plane, which has been described as white with red, yellow, and blue stripes, was found in the bush covered with branches and tarpaulin.

The propeller was removed and placed under the high-speed retractable gear single-engine plane. “It is suspected that the aircraft is without key documentation, which will make it difficult to track the airframe, engine, and propeller time,” the Home Affairs Minister said.

According to the preliminary assessment by the Lead Engineer, the damage to the aircraft is extensive and beyond repair. However, further assessment will be conducted by the Guyana Civil Aviation Authority (GCAA), government said.