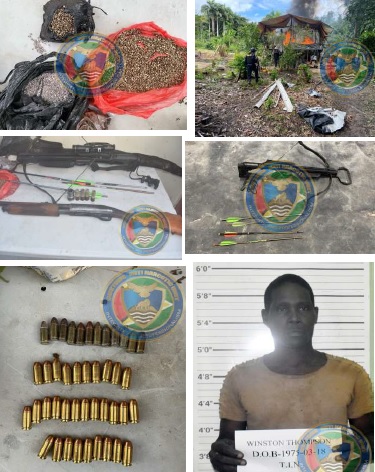 A Jamaican man was Wednesday in custody after  he was allegedly caught on a half-acre marijuana farm at Nabaclis, East Coast Demerara.

The Customs Anti-Narcotics Unit (CANU) said that during the operation on Tuesday, a shotgun, several types of ammunition, a crossbow and several arrows were also seized at the location.

He has been identified as 46-year old Winston Thompson.

CANU said its agents found a camp, located on a half-acre of land along with a total of 4000 – 5000 cannabis plants & seedlings , processed cannabis, 1 kilogram of mixed seeds, as well as a one shotgun, one crossbow with several arrows and several types of live ammunition – thirty-one 9mm , twelve 45 mm and  four 12 gauge cartridges.

“He was arrested and escorted to CANU Headquarters, along with weapons, ammunition, processed cannabis, and seeds,” CANU said.

The anti drug agency said it “continues to conduct their operations around the country aimed at dismantling the networks that are engaged in the cultivation , sale as well as distribution of narcotics.”