Updated: Ship with US$5 million worth of ammunition not due in Guyana; never registered in Guyana 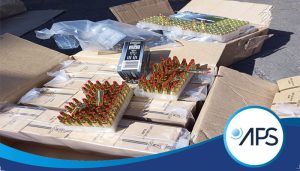 Some of the ammunition that the Senegalese authorities said were seized in three shipping containers aboard a vessel.

A cargo ship carrying three shipping containers laden with US$5 million worth of ammunition is not registered in Guyana and is not due here, the Maritime Administration (MARAD) said Thursday night.

“The vessel in question is not contained in the local ships’ registry and it is believed that registration documents were issued by International Maritime Safety Agency of Guyana (IMSAG), an entity with which the administration had severed all ties since 13th August, 2021,” MARAD said in a statement late Thursday night.

MARAD made  known its position after number of vessel-tracking systems show that the MV Eolika was due to arrive in Guyana from Dakar, Senegal on January 28, after passing through the Caribbean.

MARAD said it has since notified all regional, and international bodies and organizations of the effective termination of all arrangements with IMSAG, and advised of the veracity of registration certificates issued to vessels by IMSAG. “As a result, several vessels have been detained in various ports for false registration documents. MARAD assures that it will continue to actively monitor this incident, and will spare no effort in protecting the image of the Guyana flag,” the maritime regulator said.

The Senegalese News Agency quoted the Senegalese customs agency as saying that the munitions were discovered and seized on Monday, on three containers conveyed by a ship in supply to the autonomous port of Dakar.

The customs services indicated that they had boarded a ship in supply at the port of Dakar carrying in its cargo three containers filled with munitions of war.

“Customs, alerted by the absence of reliable navigation and maritime transport documents, but above all by the inconsistencies in the declarations of the captain of the ship, immediately proceeded to search and check the cargo”, underlines the press release. .

The operation had led to the discovery of three containers filled with various types of ammunition.

The Customs Maritime Subdivision had worked closely with the National Brigade of Firefighters, the EOD Unit of the National Army, the National Gendarmerie and Dakar port authorities to unload and evaluate the cargo in the security conditions required in terms of weapons and explosives.

The customs services said the crew members were being interviewed to deepen the ongoing investigation.

The operation was carried out on the “Eoloka”, a ship flying the Guyanese flag, which was in transit at the port of Dakar, Dakar daily newspapers reported on Tuesday.