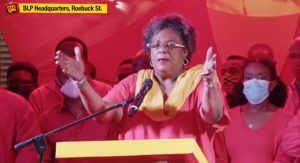 Addressing a victory rally outside her Barbados Labour Party (BLP) headquarters early Thursday morning, she said it was important that her party obtained a fresh mandate from the electorate in a snap election.

“It is our solemn commitment that there are many things that must now be on the front-burner and that is why we came to you earlier.  We could have stayed on for another 18 months and drawn salary and done just enough to keep us going but we understood that it would not be enough to keep this country safe or to build a platform for prosperity so we took the risk and we came to you the people,” she said.

With a second consecutive 30-seat drubbing of the DLP, Ms. Mottley dismissed assertions by her detractors that Barbados was set to  become a one-party State. Instead, she said that Barbados’ constitution allowed for a political party to take all the seats. “It would be remiss of me not to address this one issue because we went into this election with people accusing us of wanting to have a one-party State when in truth and in fact our Constitution admits in a multiparty democracy of the people giving all of the seats to one entity. I am a child of democracy,” said Ms. Mottley who is also an Attorney-at-Law.

DLP President De Peiza said her party “will concede as we must” , even as he lamented the low voter turnout. “Our concern is that the voter turnout continues to be depressed and I do believe that we have to take a serious look at that going forward as to how we reclaim the confidence of our people in the process of democracy,” she said.

She said the DLP would regroup, including her future as party leader, but she was “proud” of her contributions to her party.  Ms. De Peiza said that it was a “reckless time” to call an election.

At least 5,000 COVID-19 positive persons were not allowed to vote.

The Irfaan Ali-led administration and the Mottley-led Barbados government have been working on several business and education initiatives for the two sister CARICOM member states.