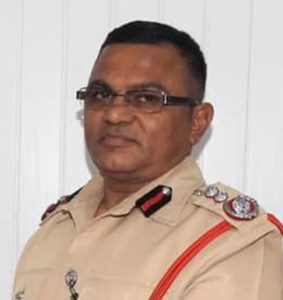 Fire Chief Kalamadeen Edoo has been sent off the job into retirement, amid allegations of financial malpractice, he confirmed on Thursday.

Mr. Edoo said that  his six months pre-retirement leave should have started next Monday, 17th January but he received correspondence from the Permanent Secretary of the Ministry of Home Affairs, Mae Thomas instructing him to hand over to Deputy Fire Chief, Gregory Wickham on Friday. “No reason! They just gave me a letter to hand over tomorrow  but it should have been on Monday,” he told Demerara Waves Online News.

Asked to respond to several allegations of financial wrongdoing at the Guyana Fire Service (GFS), he would only say that an investigation would be conducted.

Mr. Edoo said that since assuming office as Chief Fire Officer last year, he had asked for an investigation into corruption at the agency but none had been done. “There is massive corruption going on in the Fire Service. I took over the 1st of February and since the 9th of February requesting an audit because I know the corruption that is taking place and to date nobody did anything so because I bring it to light, everybody fighting within the Department against me; it’s a massive fight against me,” he said.

Mr. Edoo told News-Talk Radio that he received a letter from the Permanent Secretary of the Ministry of Home Affairs, Mae Thomas informing him to hand over to Deputy Fire Chief Wickham.

Told that there were swirling allegations that he had charged entities exorbitant sums for licences and permits, he said he only signed. “At no time the Chief Fire Officer every prepare anybody licence. The Chief Fire Officer only signs licences, nothing more,” he said. He said the accusations being levelled against him are “just rumours.” “There will be an investigation and the investigation will bring out the truth,” he said, but declined to say whether his departure from the Fire Service had anything to do with the probe.