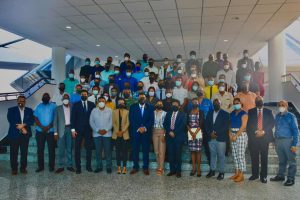 President Irfaan Ali on Tuesday launched an Agriculture and Innovation Entrepreneurship Programme that promises to generate millions of dollars and create jobs through shade house techniques.

Dr. Ali said the project envisages government initially providing 25 shade houses and up to 300 in the medium to long term.

Roughly calculating the projected revenue, he singled out cauliflower, broccoli and carrots as niche, high-value agricultural produce which could generate GY$57 million wholesale and GY$112 million retail.  The President said that according to data, the shade house production per cycle is expected to be 3000 pounds, and with three cycles per annum, it will jump to approximately 9,000 pounds per year.

The President said a company named ‘One Guyana’ would be registered and would have shareholders drawn from among the youths.

As the Guyana government, which has lead responsibility for agriculture in the Caribbean Community, seeks to remove trade barriers, the Guyanese leader said the aim is to fast-track and expand domestic production to cash-in on market opportunities in the Caribbean. “So while we’re working on one hand to expand local production for the local market, we are already eliminating the barriers to the regional markets, so that we are going to expand this progressively until we are able to reach into the regional market also. So you have to see yourselves as part of a regional system and part of the local system,” he said.

He said the ministries of agriculture, youth, trade; labour, home affairs, finance tourism, industry and commerce, and the prime minister’s office as well as the Guyana Defence Force, Guyana Police Force and the Guyana Prison Service an the private sector would be involved in nurturing project. “We’re creating a single vehicle not for training and empowerment alone but for the creation  of jobs and wealth for you, for your country and for your communities,” he said.

Noting that the project was borne out of a request for assistance from three female graduates from the University of Guyana’s Faculty of Agriculture, the President said the time has come to turn graduates into entrepreneurs. “The concept that you go to university to get a degree to go to work f0r someone is  an outdated concept. It is a totally outdated concept,” he said.