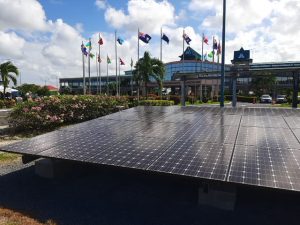 The solar panels that are part of the photovoltaic energy system that is serving the CARICOM headquarters.

She was speaking at the official commissioning of a 400 kilowatt  solar photovoltaic power generation plant and battery power conditioning system in the compound of the CARICOM headquarters at Liliendaal, Greater Georgetown.

“This PV power generation system is expected to generate more electricity than is required by the secretariat for its operation on an annual basis and the expectation is that the available excess energy would feed into the utility grid during its off-peak operation periods.

The secretariat is seeking to conclude the arrangements which will attend the bidirectional flow of electricity with GPL in this quarter,” he said. Thee Chief Executive Officer of the Guyana Power and Light Inc and the Chief Executive Officer of the Guyana Energy Agency Dr Mahender Sharma were among senior sector officials present at the ceremony.

The cost of the solar farm is US$7 million and was funded by the government of Japan.

CARICOM Deputy Secretary General Dr. Armstrong Alexis said data would be collected from the performance of the solar energy farm with the aim of using it as a model.

“The CARICOM Secretariat considers itself fortunate to be the recipient of such an elaborate infrastructure that will lead towards the reduction in the amount of CO2 emissions produced in the region. As we work towards reducing our carbon footprint, the outcome of this project will also strengthen our case in the international community as we will have the results of this project as evidence that we can present on our contribution to achieving energy efficiency in the Caribbean,” he said. 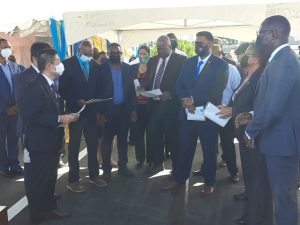 Representative of the Japan International Cooperation Agency, Hiroyasu Tonokawa noted that while Caribbean countries have stated their commitment towards clean energy and energy efficiency, they are still dependent on hydrocarbon-sourced energy.  “However, many challenges still remain. Despite the commitment of the respective governments, most CARICOM member states are heavily dependent on fossil fuels which do not have an adverse influence on climate change but is also the cause of high energy cost in the region,” he said.

President Irfaan Ali used the opportunity to flag the need for greater efficiency at the Guyana-based headquarters. “We are not an agency with a huge budget and so on so it’s very important that here at the headquarter, things are balanced and are run in an efficient manner, cutting down important cost centres and energy is an important cost centre that has to be addressed across governments so this project also falls within that framework- helping us to improving efficiency, reducing cost and giving us better service delivery,” he said.

Dr. Ali said the solar energy project was part of the futuristic planning to improve efficiency and reduce capital cost as part of the overall quest to lead the charge by example. “It’s also about leadership. We can’t be talking about renewable energy and making no attempt to transition at the home of the region and the same can be said about countries. We can’t be talking about reducing the cost of energy, transitioning to cleaner energy and we’re not doing anything to transition to that,” he said.

In Guyana, he noted that government was using hydro, solar, wind and natural gas to produce clean and efficient energy. He noted that Barbados and Jamaica were also taking steps to get into alternative energy.

Prime Minister Mark Phillips expected that the 1,500 solar panels, servers and batteries would not only allow the secretariat to “derive 100% of its energy from solar base sources on good sun days” but also stimulate interest in clean, renewable energy. “It is hoped that the project will serve as a catalyst to enhance awareness of renewable energy and energy management amongst local businesses as well as other member countries and regions by demonstrating the technologies,” he said.