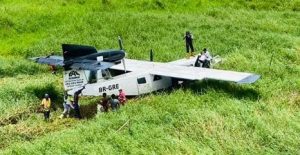 The Roraima Airways pilot of the Britten-Norman Trislander that he landed in a swampy area near the Haags-Bosch landfill site last year has been suspended, officials said Monday.

Speaking at a press conference organised by the Ministry of Public Works, the Director-General of the Guyana Civil Aviation Authority (GCAA), Retired Lt. Col. Egbert Field said the pilot has been suspended.

“Some penalties were applied to the operator and to the pilot involved and those penalties have been activated and the pilot is now in suspension for that accident for  a particular period,”  Mr.  Field said.

That aircraft had been under the command of Captain Learie Barclay when it had made an emergency landing on August 14, 2021.  The plane, whose registration marking is 8R-GRE, had been returning from Imbaimadai.

Aviation Minister, Juan Edghill added that the crash-landing of the plane as it had been heading to the Eugene F. Correia ‘Ogle’ International Airport had been caused by “fuel starvation”.

Authorities said the probe into an incident at Kamarang where a man had ran into the propeller was continuing and parts have been sent overseas for testing.

The Guyana Civil Aviation Authority, according to its Director General, was recognised by the International Civil Aviation Organisation (ICAO) and has been identified to assist other Caribbean countries. He said Guyana was number one in the Americas for safety oversight capability and number one in air navigation services South America and number two in the Americas.