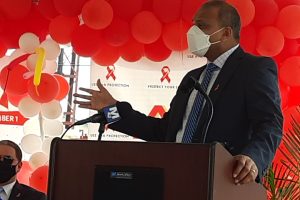 The Ministry of Health says there are now 967 new COVID cases, amid informed speculation that the highly contagious Omicron variant is in Guyana, a situation that has prompted an appeal for isolated persons to stay home.

Official statistics also show that 3,374 persons have now been told to isolate themselves at home to prevent the virus from spreading further. “All these people who have tested positive, we are asking them to stay in isolation because there are people, who have tested positive, and sometimes they still walk around the place which means that they would be in their infectious period and they would be the persons who would be spreading it to others,” Health Minister Dr Frank Anthony said.

In Region Three (West Demerara-Essequibo Islands), the hotspots are in Parfaite Harmonie where there are 28 cases; Tuschen with 20 cases; Uitvlugt 19 and Zeelugt 17.

Across in Region Six (East Berbice-Corentyne) , the statistics show that there is a “huge spike” in New Amsterdam with 87 cases and 21 cases in Cumberland.

In Region Seven (Cuyuni-Mazaruni), there are 106 cases in Bartica as well as in Lethem (Region Nine); there are 72 in Lethem, 22 in Tabatinga, and 18 in Culvert City “Again, we have  seen a  surge in these cases in Region Nine,” he said.

Of the 75 persons, who are hospitalised, the Health Ministry says that six of them are seriously sick and are receiving intensive care.

The number of COVID deaths dating back to March 2021 is now 1,064.  Five others have been told to quarantine as they await results or are being observed to see if they will develop symptoms.

The Ministry of Health says that based on trends and comparisons with other countries in the Caribbean and elsewhere, the Omicron variant is in Guyana. The Health Minister has said that, even as Guyana awaits confirmation about the variants here, the PCR tests have indicated an S-Gene dropout which means that most likely the Omicron variant is here.

Dr Anthony said more persons are taking booster shots- 14,175 persons, and he again appealed to Guyanese to go out and take their booster shots to combat Omicron.