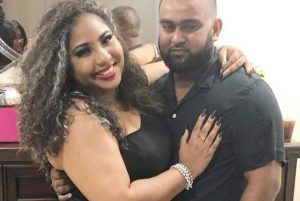 A 27-year old woman was shot dead and her partner’s body was found with a single gunshot wound to the head, and a handgun about two feet away from him in what police suspect was a murder-suicide.

Guyana Police Force investigators said the bodies of Elizabeth Dass and Nicholas Low-a-Chee were found in a bedroom of their residence at Lot 1-2 Sarah Johanna, East Bank Demerara.

According to police, there was no sign of damage or forced entry seen on the building they lived in. Neighbours said the couple was last seen alive on January 1, 2022 at about 10 AM.

Homicide detectives were informed by Low-a-Chee’s uncle that he went to check on him on Tuesday, January 4 at about 7:30 AM after several attempts to reach him by phone proved futile.

The uncle also told police that on arrival, he saw a male in the back yard who is known to the family and he observed that the door was partly opened.

“The uncle then reportedly opened the door further, made a few steps into the house and repeatedly called out for his nephew, but did not get any response. He proceeded further into the house, in the direction of his bedroom and it was at this point he started getting a foul scent,” the Guyana Police Force said.

The uncle further informed police that he then pushed open the bedroom door and stumbled upon the motionless bodies of Dass and  Low-A-Chee, in pools of blood on the bed and floor with what appeared to be a black handgun, about two feet away from Low-A-Chee’s body.

Crime scene detectives said they found three suspected .32 spent shells in the bedroom,– one on the bed, one on the floor and the other about six feet west of his body.

Police said the suspected firearm was examined and processed for fingerprints but none was detected. The hands and the bodies of the couple were processed for gunshot residue, and blood samples from Low-A-Chee were taken along with what was found in the bedroom for DNA testing.

A further search within the premises unearthed a quantity of suspected cannabis which was later weighed and amounted to 370 grams.

Police said they questioned several persons in the area but no useful information was obtained.