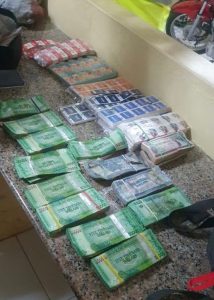 The recovered cash and phone cards

Two Essequibo Coast youths were Saturday – New Year’s Day – arrested and $4.8 million and other items recovered, hours after they robbed and injured a businessman and his wife at Charity Waterfront, the Guyana Police Force said.

Those in custody are 21 and 25 years old, police added. Police said they also recovered just over GY$1.1 million in Digicel and GTT phone cards.

After the businessman freed himself, having been tied up, he chased and chopped one of the bandits and then police and community police cordoned off the backlands between Dartmouth and New Road.

The businessman, who was chopped in his head by the other bandit, was rushed to the Charity Hospital from where he was transferred to the Suddie Hospital where he was hospitalised in a stable condition, police added.

“Police with assistance from public-spirited citizens, including some members of the Charity CPG Group, cordoned off the area between New Road and Dartmouth backlands where the suspects fled and a manhunt lasting some five hours led to the suspects being apprehended and taken to the Charity Police Station,” police said.

The businessman, who is 55 years old, told police that at about 11 o’clock Saturday morning he was about to open his business place when the two suspects, who were armed with a cutlass and knife, pushed the door and entered.

He further recalled that the one with the knife held him up and placed the knife to his throat while the other suspect attacked the victim’s 57-year-old wife and covered her mouth after which they taped both of their hands and feet with duck tape. He said the men searched the premises and collected the mentioned items and began to make good their escape.