Natural Resource Fund board to be “non-political” – President Ali 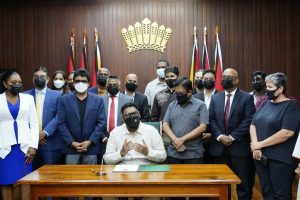 President Irfaan Ali on Saturday- New Year’s Day- promised Guyanese that the members of the Natural Resource Fund Board of Directors would not be politically-aligned persons, even as assailed the opposition for last Wednesday’s ruckus in the National Assembly.

“We have created a governance and operational structure that is transparent and accountable and in which non-political, highly reputable persons carry out the responsibilities of supervision and compliance,” Dr. Ali said.

The Guyanese leader said the “oversight and control are with you the people” and he sought to convince the nation that, contrary to claims by the opposition and certain media outlets that he would be appointing the Board of Directors unilaterally and will have control over them.

He explained that the private sector would represent civil society on the board, but the opposition People’s National Congress Reform has repeatedly argued that the Private Sector Commission is politically biased. That business organisation and several of its affiliates have endorsed the passage of the Natural Resource Fund Act and chastised the opposition’s actions in the National Assembly. Several civil society organisations, which had called for debate on the wealth fund law to be halted to allow for more consultation, appear not to be captured in the legislation.

The NRF Act states that the three to five-member Board shall be appointed by the President and he will pick one of them as Chairman. The law says that the Directors must have wide experience and ability in legal, financial, business, or administrative matters. One of them has to be nominated by the National Assembly and another by the private sector.  Unlike the Investment Committee, the law does not explicitly state that one of the members must be nominated by the Leader of the Opposition.

The Natural Resource Fund legislation, which now includes a Board of Directors and a Public Accountability and Oversight Committee that has been reduced from 22 to nine members, was passed by the National Assembly despite last Wednesday’s violent disorder by opposition parliamentarians. Opposition A Partnership for National Unity+Alliance For Change (APNU+AFC) parliamentarian Annette Ferguson has since publicly admitted grabbing and removing the mace- the symbol of parliamentary authority- while Finance Minister Dr Ashni Singh was speaking on the Bill. Ms. Ferguson has said that she and her colleagues were very frustrated that none of their calls for the Bill to be further considered were ignored.  House Speaker Manzoor Nadir has since warned that those responsible for the mayhem, including the disconnection of microphones and the Internet, will be punished.

President Ali on Saturday deplored the opposition lawmakers for “resorting to violent threats and intimidation to stop a bill whose virtues they feared.”  “The contempt to seize the Speaker’s Mace – the symbol of his authority over the conduct of the Assembly – and to surround the Minister of Finance, shouting in his face was gross unparliamentary behaviour that carried a dire warning,” the President said. The Finance Minister was ring-fenced by a human chain of government ministers including Prime Minister Mark Phillips while delivering his presentation. “What we witnessed in the National Assembly was not only a violent assault on democracy but a blatant disrespect for the highest law-making institution of our nation. If persons charged with the responsibility for the conduct of the nation’s business resort to violence and intimidation, what example do they give to the nation, especially to the young?,” he said.

Dr. Ali again restated that 2019 version of the Natural Resource Act that had been unilaterally passed during the period of the no-confidence motion and had given the Minister of Finance excessive power over the National Resource Fund, and placed it instead under the supervision of an independent and nationally accountable body, is somehow wrong.  He argued that if the government had wanted to steal from the Natural Resource Fund would have been to leave it with the APNU+AFC version of the law leave the Minister of Finance in control with little or no oversight. “That is the plan that the APNU-AFC put in place for itself, assuming that it had fixed the March 2020 elections and would have all the power today to abuse the money in the NRF as they pleased.  What your democratically elected Government has now done is to remove the Minister of Finance from having such unlimited and unbridled power,” he said.

He said the People’s Progressive Party Civic administration’s version of the Bill includes a governance and operational structure that is transparent and accountable and “in which non-political, highly reputable persons carry out the responsibilities of supervision and compliance.”

The President said that some of the US$534 million currently in the Natural Resource Fund “must be spent on your welfare and wellbeing.” He said that “every cent of that money” would be accounted for through the National Assembly, its Public Accounts Committee and the Auditor General’s report.

The World Bank reportedly estimates that Guyana can earn US$72.8 billion in revenues from multiple offshore projects.