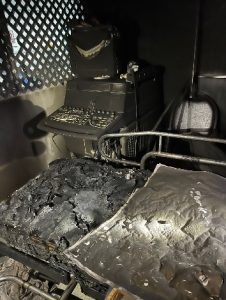 The Georgetown Public Hospital’s heart diagnosis facility was Saturday morning- New Year’s- destroyed by fire but none of the patients in the Intensive Care Unit (ICU) and Cardiac Intensive Care Unit (CICU) was injured by the blaze suspected to be the work of arsonists, a senior official said.

Acting Chief Executive Officer of  the GPHC,  Robert Rambarran told Demerara Waves Online News / News-Talk Radio Guyana 103.1 FM that investigators have so far seen an oily substance in the echocardiogram laboratory where the fire originated. “From all indications, it is suspected arson because there is an oil-based substance that seen in the room and from what the guys at fire service reported is that the fire was on a bed that is  in this room so it seems to have drenched the mattress and even some chairs that are in there, we actually press on it you can see it was drenched,” he said.

Mr. Rambarran estimates that the damage to the echocardiogram machine and associated equipment is about GY$25 million.

He said smoke quickly spread to the ICU and CICU where patients were admitted. He said four patients from ICU and seven from CICU were evacuated to the recovery room in the main operating theatre and the ophthalmology ward. “At present, the smoke has faded and we are preparing to move patients back in so patient was actually affected,” Mr. Rambarran added.

The fire occurred at about 5:40 AM. He said the door  is usually locked and there was no sign of forced entry.

The GPHC’s CEO said Fire Chief Edoo informed hospital officials that the fire was largely contained to the echocardiogram laboratory because the room was sealed and could not get oxygen to spread. “The fire could have spread and it could have been very catastrophic,” he said.  Dr. Rambarran said the ICU and CICU were affected by the fire through the ceiling vents.

Mr. Rambarran said the fire would slow up the heart diagnostic services and “create a backlog”, but he said the GPHC has another echocardiogram machine that it would be switching on. He said authorities were wary of the fact that putting too much pressure on one machine for such “high-demand” services. While the GPHC has budgeted to buy new heart diagnostic equipment this year, the CEO said that if required the hospital would have to obtain such services from private facilities. If needs be and the patients are critical, we will have to do that.

This the fifth such fire for in recent months at government-owned facilities; the others being at the Mabaruma Secondary Secondary School, North Ruimveldt Multilateral School, Brickdam Police Station including ‘A’ Division Headquarters, and the building housing the Director of Public Prosecutions Chambers and the Office of Professional Responsibility.