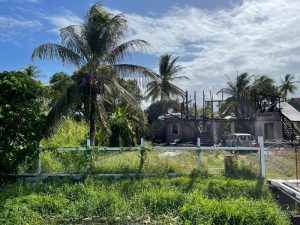 The house at 45 Company Road, Buxton where the Leitch family lived.

The GFS said that at 8:50 AM firefighters responded to a house on fire at Lot 169 Rose Street, West Ruimveldt. There, a one flat wooden and concrete building owned and occupied by Jewel Anderson and her family of three  was destroyed. In all, four persons were rendered homeless.

Investigators were told that the cause of the fire might have been a lit mosquito coil left unattended, it ignited window curtain and spread to the entire building.

Across at Ankervillle, Port Mourant, Berbice, firefighters at 5:14 PM,  the GFS received a call that a two storey wooden building occupied by Ravi Rashaney and his family of four was burning. But, the building was not saved and and the five persons are now homeless.

At 45 Company Road, Buxton, East Coast Demerara, a two-storey wooden and concrete building was burnt to the ground. The Fire Service said it received a fire call at 9:32 PM but could not save the building and its contents.

The top floor was occupied by Estwick Leitch and Edorl Leitch, while the ground floor was occupied by Carlton Leitch and Odette Cummings. Investigators said the fire might have been of electrical origin. “The purported cause of the fire is said to be an overloaded electrical circuit which feedback to the distribution panel, same arced and sparked and ignited nearby combustible materials,” the fire service said.

The GFS is urging citizens to be extra careful during the holiday season and to take the necessary precautions to avoid these tragedies.

Prevention and safety tips can be found on the GFS’ Facebook page, please follow them to protect you and your loved ones during this time.