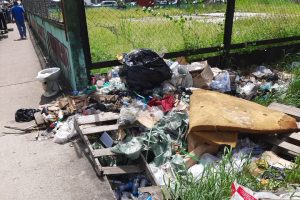 President Irfaan Ali on Wednesday announced that police and soldiers would be joining hands with the business community in a massive clean-up of Georgetown in the coming weeks.

He made the announcement during an address at a Christmas Luncheon at the Guyana Defence Force’s headquarters, Base Camp Ayanganna, he said he had already spoken with the GDF Chief of Staff, Godfrey Bess and Police Commissioner Nigel Hoppie about the clean-up initiative.

“Here in Georgetown we are not going to go through the New Year with the city looking the way it is in terms of cleanliness, and we are going to lead by example by launching with the private sector a massive cleanup of the city,” he said.

The President said that after the clean-up he expected the elected local council to maintain the environment.  “We will show them by our example that we can do it and if we do it as a people, then those who are in the leadership position whether at the NDC, the Town Council or the City Council, they must follow with their leadership in keeping it the way we will hand it to them,” he said.

Georgetown’s City administration, sometimes with assistance from the private sector, has been struggling to clean up the streets, drains and alleyways of large quantities of solid waste in commercial and residential areas. This is compounded by poor waste disposal by people in the city. The Head of the Solid Waste Management Department of City Hall, Walter Narine had expressed concern that street dwellers scatter garbage from receptacles or leave food boxes and cups on the streets after usage. He had also said that foreign shoppers wantonly dispose clothing wrappers in commercial Georgetown, adding to the waste build-up. There is also poor coordination between drainage cleaning and waste collection.

2021-12-22
Denis Chabrol
Previous: Joint Services get one month tax free bonus
Next: OPINION: The new leader hitting the right tones from the get-go