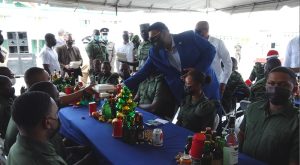 President Irfaan Ali on Wednesday announced that members of the Guyana Defence Force and other Joint Services would get a one-month tax free salary as a bonus, even as he took thinly veiled swipe at the then APNU+AFC administration for scrapping it over the past five years.

“For those in our society, who believe you can just take things away, and who believe that you can take things away from the soldier, I challenge them to go spend a year in some of the locations and live the life you do in protection of your country and then they will know whether you deserve it,” he said during a visit to the GDF’s headquarters. Base Ayanganna.

Then Minister of Finance, Winston Jordan had urged the security forces to cease yearning for bonuses because they rob them of salary increases which are permanent and long-term and help to determine the size of their pensions.

While the People’s Progressive Party administration had only mustered two weeks bonus last year, the President said that , it was now a full month’s salary again.

Meanwhile, Dr. Ali highlighted that his administration has been spending large sums of money on recapitalising the GDF and creating opportunities for them to study remotely Online at any of the military bases across Guyana to prepare them to pursue other careers after leaving the GDF. “We returned two weeks bonus. This year we’re returning the full month, tax-free bonus to you,” he said.

A number of Guyanese soldiers is in India pursuing studies under a scholarship programme with the Indian government.