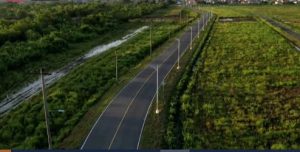 The Mocha to Great Diamond Road

The Mocha to Great Diamond interconnecting road was Monday morning commissioned and is being touted to bring massive relief to commuters who are being plagued by long hours of waiting time to get to and from work.

President Irfaan Ali, in his address,  warned motorists against speeding  and announced that the traffic law would be amended to provide for electronic ticketing in keeping with a safe road usage plan that includes the use of cameras at three police outposts along that road.

“The next phase, which will be very soon is to connect cameras to those outposts and you know we’re testing right now with the cameras – speeding- and I’m very happy to inform you that the cameras can even pick up if you have your seatbelt on so there will be some amendments that will be made to the law to allow for the electronic ticketing,” he said.

Officials said the cost of the road is GY$5 billion.

Dr. Ali also  cautioned that action would be taken against heavy duty vehicle users on the Mocha to Little Diamond Road. “This road is designed for a specific category of vehicles and that is small vehicles, SUVs. The big trucks, you will see barriers. If you think that it is your responsibility to take down the barriers because you want to break the laws, there will be consequences and you will face the consequences,” he said.

Minister of Housing and Water, Colin Croal said the new road opens up 300 to 400 acres of land for commercial and industrial development as well as additional house lots. He said about 18,000 persons live along the new road.

Junior Housing and Water Minister Susan Rodrigues said the road was conceptualised in 2013 by Dr. Ali but was not executed by the David Granger-led coalition administration.