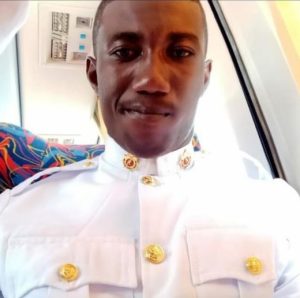 The Guyana Defence Force (GDF) on Sunday said the body of  Coast Guard Ordinary Rating Junior Kenroy Small ended with the spotting of a body at the mouth of the Essequibo River almost three days after he went overboard in a mishap involving in an unregistered private boat.

“The police were notified and the body has since been positively identified,” the GDF said in a statement. The military said the “investigation to ascertain  the circumstances surrounding the incident continues.”

The Guyana Police Force said that the GDF Coast Commander for Fort Island, Staff Sergeant Everette Tudor and three other persons, who were aboard the ill-fated vessel, were all intoxicated. Breathalyser tests for each of them have been taken.

The civilian captain of the boat told police that the vessel struck a wave and capsized in the vicinity of St Lawrence.

Among those rescued by a group of GDF soldiers, who responded to cries for help, were two teenagers from Le Destin  from East Bank Essequibo. 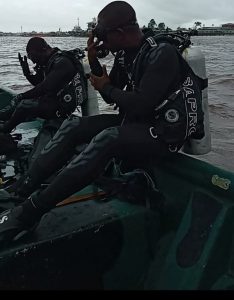 GDF Coast Guard divers who were deployed on Saturday.

Investigators were told that ight soldiers headed by Lance Corporal 25009 Darwyn Anderson were heading to Parika from Essequibo in a private speedboat. Whilst in the vicinity of St. Lawrence they heard shouts of persons in the river and observed a boat was sinking.  “As the ranks quickly went to the direction of the persons, they observed four males in the water and two other males were in a green and black boat a few meters away.