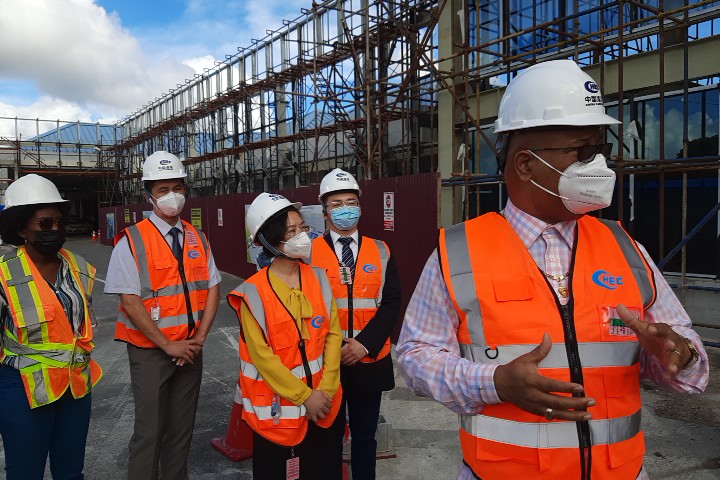 Public Works Minister Juan Edghill, and officials of CHEC and the Chinese Embassy at the Cheddi Jagan International Airport.

China Harbour Engineering Corporation (CHEC) has completed all outstanding works on the Cheddi Jagan International Airport (CJIA) in keeping with its initial contract, but construction of three other areas would not be finished until next year due to global shipping delays of materials, officials said Friday.

“Based upon their shipping schedule and what is happening around the world, we have agreed that we will give  an extension of time to complete the new works, not the contract that we inherited,” Public Works Minister Juan Edghill told reporters in the presence of CHEC officials and China’s Ambassador to Guyana.

CHEC Guyana Country Manager, Sammy Chan told reporters that, “we commit to finish the airport with a high quality and before the end of the timeline that we have set up and we will submit a perfect project.”

He said the installation of a curtain wall across the front of the airport, construction of a super-structure that would accommodate 20 concession areas, and the construction of two new boarding areas would be completed by June 30, 2022. “On schedule for the 31st of December are all those items that we had concern about,” he said. Mr Edghill added that the next set of glass for the curtain wall is expected in Guyana on December 21.

He said the three new items were expected to cost CHEC more than US$9 million before the price of steel  was increased but now it could be more than US$15 million, all of which would be paid for by CHEC.

He said after returning to office in August, 2020, the People’s Progressive Party Civic-led administration engaged in “rigorous” negotiations concerning 71 ” critical items” that needed to be fixed to ensure the facility functions effectively and more than 1,000 items on a master tracking list that needed to be put in place.

Explaining the visible work  and a corridor for two additional boarding bridges that are still being done at the CJIA, Mr. Edghill stressed that CHEC was paying for those because of the amended contract that government was dissatisfied with.

Mr. Edghill said the new work that CHEC is paying for includes a boarding corridor that will connect to immigration and boarding bridges that will lead to an aircraft apron. “Their materials have arrived and they’re busy installing,” he said.

The Public Works Minister, who is responsible for the aviation sector, said all of the airbridges were now working. “My understanding is that we have had some problems and we have had those problems addressed but we’re still in defects liability period,” he said when pressed on the functioning of the airbridges. He said that problems with the washrooms have been addressed.

2021-12-17
Denis Chabrol
Previous: OPINION: PNC Congress is here -how will it be, where will it lead?
Next: GDF Coast Guardsman feared drowned