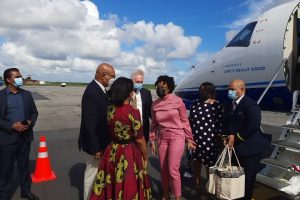 InterCaribbean Airways plans to train Guyanese to become cabin attendants, the carrier’s Chief Executive Officer of the airline, Trevor Sadler announcement on Friday minutes after the inaugural flight arrived from Guyana from Barbados.

“On Monday, we start a new class of flight attendants here in Georgetown so we don’t just speak but we follow on with the words and hiring of additional Guyanese is on the way. We’re also looking at the active hiring for pilots,” he said at a brief welcoming ceremony held at the Cheddi Jagan International Airport.

Guyana’s Minister of Aviation, Juan Edghill welcomes the announcement. “We’re just not talking local content as a façade or a cliché. We mean it and here it is on the first flight of InterCaribbean you’re seeing a Guyanese on board,” he said.

Mr.  Sadler says that InterCaribbean plans to open an office at the Giftland Mall.

Barbados’ Minister of Tourism and International Transport, Senator Lisa Cummins remarked that she was working to provide agreed training to persons in Guyana’s hospitality sector.

Captain Gerry Gouveia Jr. of Roraima Group of Companies, whose company is the local handling agent for InterCaribbean also hailed the carrier’s “very strong local content strategy and will be dedicating themselves to the people of Guyana.”

2021-12-17
Denis Chabrol
Previous: GTT throws its support behind the HerVenture app
Next: OPINION: PNC Congress is here -how will it be, where will it lead?