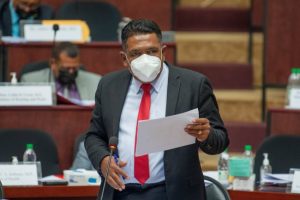 Agriculture Minister Zulfikar Mustapha says the severe floods earlier this year resulted in the State-owned Guyana Sugar Corporation (GUYSUCO) spending GY$2.3 billions of dollars that had been originally allocated in the 2021 National Budget for out-of-crop maintenance, pensions, union dues and other expenses.

He told the House Committee of Supply, under persistent grilling by Shadow Home Affairs Minister Khemraj Ramjattan, that the GY$2.3 billion was spent on flood-recovery for the already decades-long ailing sugar corporation.

Spending from the contingency fund is only legally possible if it is unforeseen, urgent and unavoidable, and so Mr. Ramjattan asked, “when did this thing become urgent for you, as under the constitution?” In response, Mr. Mustapha said, “Mr. Speaker, the Honourable Member would have known that we had a serious flood; one of the worst floods in the history of the country…We would have expended a large sum to ensure that we safeguard GUYSUCO. The budget of GUYSUCO would have been exhausted; that is why this has become an emergency to input back the cash into GUYSUCO,” he said.

Among the allocations is GY$1.662 billion for wages and salaries as a contingent, not, according to the Agriculture Minister, to employ more workers. “This is a replacement of the cash that had been utilised because, as I was saying, there had been a number of emergency works during that period- from May on to August – and because of that all the Heads would have been exhausted,” he added.

The Agriculture Minister, meanwhile, announced that 1,200 of the 5,263 retrenched workers have been reemployed. He added that over 50 percent of GUYSUCO has been recapitalised with the aim of eventually breaking even as world sugar prices increase.