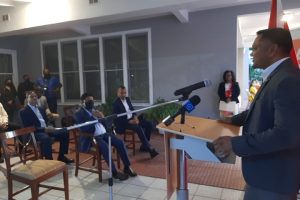 The Guyana government on Thursday insisted on the need for local content to be governed by a law instead of a policy so that highly qualified Guyanese could be employed instead of being content with low-level jobs, despite previous objections by ExxonMobil.

Addressing the Canada-Guyana Chamber of Commerce (CGCC)-hosted “Cocktails and Conversations”, Minister of Natural Resources Minister Vickram Bharrat, he cautioned against merely stipulating a quota of Guyanese who the International Oil Companies (IOC s) must employ as locals would be hired as cleaners, security guards and labourers. Noting that Guyanese does not have highly qualified personnel at the moment, he urged the CGCC and the American Chamber of Commerce- Guyana (AMCHAM) to build human resource capacity to fill vacancies or passing the Local Content legislation would be a waste of time.

He assured the Local Content Bill would be tabled in the National Assembly before the end of the year as there would be at least another sitting after next Monday.

Mr. Bharat explained that the Local Content Bill would assure Guyanese products, produce and services are supplied to the Floating Production, Storage and Offloading (FPSO) vessels. “It is to ensure that our young, brilliant Guyanese and who are trained and they are qualified; that they are employed by the IOCs and no to leave it as a policy at the whims and fancies of any IOC; that is why we are moving towards a legislation. We are moving towards a law to say to the IOCs that you must employ Guyanese in all the different areas in the oil and gas value chain,” he said.

The Natural Resources Minister appealed to Guyana’s business sector to “up our game” and become competitive in quality and price rather than merely expecting the IOCs to buy their goods and services because it is in the law. He restated that small businesses need to take risks ad see themselves as partners rather than competitors.

Earlier this month the President of ExxonMobil Alistair Routledge expressed reservation about legislating local content. “We feel that legislating outcome is dangerous. We need to really focus on the inputs to generating effective local content and then work collaboratively,” he said, citing the need for collaboration between the government and the private sector. ExxonMobil’s operations account for more than 2,800 Guyanese or more than 50 percent of the local workforce. He said they could be eligible for promotion to supervisors  with the provision of training, on-the-job experience and transfer of knowledge.