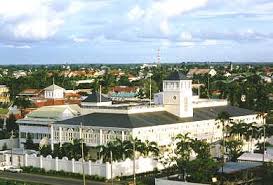 The United States Embassy in Guyana.

The United States (US) government has called on the Guyana government to take a strong position on fighting corruption has  advised the private sector to pick “reputable” companies to do business with.

In a message to mark International Anti-Corruption Day to be observed on Thursday, the American Embassy in Guyana said in a statement that this oil-rich South American nation needed to make its position clear on this global scourge.

“A strong anti-corruption stance now will show Guyanese citizens, and the rest of the world, that the government is committed to transparent institutions that utilize the country’s resources to the long-term benefit for all Guyanese,” the US said.

Touching on the oil sector, which currently includes 10 billion barrels of oil equivalent, the US specifically publicly asked the Irfaan Ali-led administration to pass Natural Resource Fund legislation that would ensure transparency and accountability. “We continue to look forward to the government’s initiatives to combat corruption, including Natural Resource Fund legislation that offers both transparency and clear oversight, and to a meaningful and inclusive process of stakeholder engagement,” the US said. The Guyana government has repeatedly acknowledged that, as the Inter-American Development Bank (IDB) has pointed out, that there are gaps in the existing legislation that needs to be revised, but either a new or amended Bill is yet to be tabled in the National Assembly.

The Fund currently has more than US$500 million in oil revenues but none has been spent.

Turning its attention to the private sector, the US government said advised the private sector to be careful with whom they partner to do business. “Private sector actors must also answer for any role that they play in corrupt practices, and when choosing private sector partners it is advisable to choose the reputable over the most convenient.  Most importantly, a robust civil society and free press are critical to holding leaders responsible for their actions,” the embassy said.

With the National Procurement and Tender Administration Board stacked with a number of persons known to be aligned to the governing People’s Progressive Party Civic (PPPC), the US Embassy cited the need generally for procurement processes to be transparent.  “In addition, procurement processes that comply with international anti-corruption standards will ensure a level playing field for investors,” the US said.  The Guyana government is reportedly about to appoint a new Public Procurement Commission which, among other things, investigates concerns about the award of multi-million dollar contracts.

President Joe Biden is hosting a virtual Summit for Democracy, at which President Irfaan Ali has confirmed his attendance. The US said it is asking participating governments to announce meaningful commitments and initiatives, and to engage with civil society and the private and philanthropic sectors, since they play a critical role in supporting democracy, fighting corruption, and protecting human rights.

The opposition A Partnership for National Unity+Alliance For Change (APNU+AFC) has been repeatedly accusing the Ali-led government of corruption especially in the disbursement of several cash grants to Guyanese and the award of contracts.

The AFC, separately, has called on government to publish a list of the recipients of flood relief cash grants that had been provided to flood-affected farmers.