Possession of ecstasy, other designer drugs to be illegal 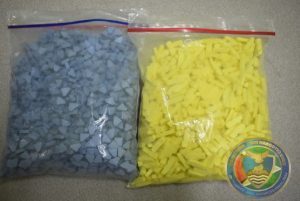 The possession of designer drugs such as ecstasy, methamphetamines and other ‘designer drugs would now be made illegal with an amendment to the Narcotics and Psychotropic Substances Act , amid increasing use of these substances by youths.

“This will ensure that persons in possession of these substances will be charged and prosecuted accordingly,” according to the explanatory memorandum.

Experts say that the existing law contains a loophole as it only provides for marijuana and cocaine rather than ecstasy and methamphetamines which are increasingly being smuggled into Guyana and are quite popular among youths. “The amendment seeks to control the possession and use of new and emerging psychotropic substances, otherwise referred to as ‘designer drugs’, being abused especially by young people,” the Bill states.

The Customs Anti-Narcotics Unit (CANU) is on record as saying that these designer drugs are being increasingly supplied to school children.