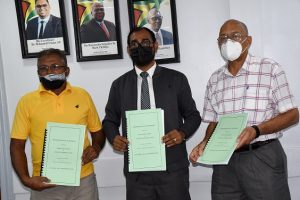 Workers of Banks DIH will get a nine percent pay increase for this year, as part of a three-year agreement between management and the Guyana Workers Union (GWU), the company said.

The signature of the Memorandum of  Agreement (MoA) was supervised by the Chief Labour Officer, Mr. Dhaneshwar Deonarine on Wednesday, November 24, 2021.

Banks DIH’s Human Resources Director Mr. Andrew Carto, who signed on behalf of the Company expressed gratitude to the Union for the cordial and professional way in which the negotiations were conducted over a three-week period. “I am happy to say that we were able to arrive at a consensus where we now have a new three-year agreement which highlights the increases, benefits and allowances which would be
applicable to employees of the company for the next three years,”  he was quoted as saying in a company statement.

Mr. Carto conveyed appreciation to the Union on behalf of Mr. Clifford Reis, Chairman/Managing Director.
General Secretary of the GWU, Mr. Pancham Singh said the Union is pleased with the agreement. “The negotiations were done virtually in light of the Covid-19 pandemic and both parties showed mutual respect during the consultations. We have a very long and cordial relationship with the Company and we would like to maintain that affiliation”, the company quoted him as saying.

2021-11-25
Denis Chabrol
Previous: Man perishes in East Coast Demerara fire
Next: OPINION: David Granger: in his season and time, he withered; opportunity lost; yet holds sway, still has a role