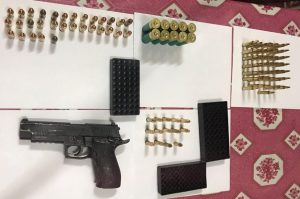 Six persons have been arrested in connection with the alleged discovery of a firearm and 104 rounds of ammunition in a house on Bourda Street, Lacytown, Georgetown, police said Saturday.

They were held in connection with the Friday evening discovery of one air pistol, ten 12 gauge cartridges, thirty-one .45 rounds, fourteen .38 rounds and forty-nine M15 rounds.

The woman and five men all denied knowledge of the items. “They were all told of the offence committed and cautioned in regards to the Judge’s rules. They denied having knowledge of the suspected items and were all arrested and placed into custody,” police said.

The Guyana Police Force said they received information and went to the property and informed the suspects, who were gathered, for their reasons for being there.

Police said a  19-year-old man, who identified himself as the caretaker of the property, granted permission and a search of the house was conducted. Investigators said they first found a an air pistol in a box in a bedroom and the ammunition in the kitchen.