Amerindians hit by starvation in Region One 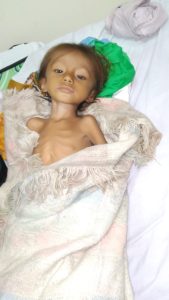 The non-governmental organisation, Blossom, saw the children and so far two have been flown to the city for emergency medical care and one is receiving care at a nearby hospital in the Region One area.

Officials said the group 0f Amerindians, who are believed to migrant Warraus from neighbouring Venezuela, are living on the bank of a river. It is unclear what is the cause of the severely malnourished state.

Sources said top government officials have been informed about the plight of the residents there, but there is need for an urgent integrated approach among the Ministries of Health, Human Services, and Foreign Affair because “this is a migrant issue.”

Demerara Waves Online News/ News-Talk Radio Guyana 103.1 FM has been reliably informed that the United Nations Children’s Fund, International Organisation for Migration and the United Nations High Commission for Refugees have all been informed. One of those agencies has since diverted some funds for emergency response to the situation.