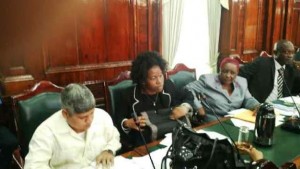 PNCR member Vanessa Kissoon (second from left) while serving as a parliamentarian.

After languishing seven years in the political wilderness due to a disagreement with then People’s National Congress Reform (PNCR) General Secretary Oscar Clarke, Ms. Vanessa Kissoon’s suspension from her party was Wednesday lifted paving the way for her return to frontline politics.

Ms. Kissoon could not be immediately contacted, but a high-level party source confirmed late Wednesday night that that the PNCR’s Central Executive Committee (CEC) unanimously approved a motion tabled by Retired Rear Admiral Gary Best. Sources said that Mr. Best, who is also an Attorney-at-Law, tabled the motion on the basis that her reinstatement has to follow the procedure of a motion which he sponsored.

The motion was reportedly seconded by veteran Executive Member, Aubrey Norton who, like Ms. Kissoon, is from Linden, Region Ten (Upper Demerara-Upper Berbice).

Wednesday’s vote had its genesis in a letter that PNCR General Secretary, Amna Ally read to the Central Executive Committee in making out a case for Ms. Kissoon’s reinstatement. The source said that Ms. Ally’s letter essentially stated that “it had been several years and both Kissoon and Clark would’ve made up.”

It is unclear whether Ms. Kissoon’s reentry on the eve of Nomination Day for the PNCR’s leadership would hold any sway in favour of either Mr. Joseph Harmon who some party quarters say is a close ally of Ms. Ally. On the other hand, over the years Mr. Norton and Ms. Kissoon are both regarded as vibrant and seasoned campaigners and activists especially in Linden.

Back in June 2014, Ms. Kissoon and Mr. Clarke had had an altercation at Congress Place over control of the keys to the PNCR’s office in Linden when the now late Sandra Adams had been appointed PNCR Region 10 Coordinator. Kissoon had accused Clarke of slapping her.

Incumbent PNCR Leader David Granger had suspended Ms. Kissoon from the party, a decision he had defended in light of accusations that he had acted unconstitutionally.

The division between Mr. Granger and Ms. Kissoon had dated back to 2012 when the opposition had initially backed the then government’s plans to remove a subsidy on electricity tariffs in Linden. Under pressure from supporters in Region 10, the then opposition had quickly back-pedaled.