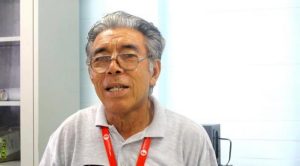 The Guyana Police Force later said that 84-year old Chan-A-Sue of Lot 56 Coralita Avenue, Bel Air Park Georgetown was driving his motorcar, bearing licence number PWW 5212 but he failed to obey the stop sign at the corner of Barrack and High Streets.

“As the said motorcar approached the intersection of High and Barrack Streets where a traffic sign marked STOP and a stop line are lawfully placed regulating the movements of traffic, the driver failed to stop and continued further east across the said intersection in front of minibus #BSS 8899 which was proceeding north along the western drive lane of High Street,” the police force said.

Investigators said as a result the front of the minibus collided with the right side centre portion of the said motorcar.

Due to the collision Chan-a-Sue lost control of his vehicle and collided with motorcar # PWW 5212 which was stationary on the eastern side parapet of High Street facing north.

Chan-a-Sue, along with the occupant,  and passengers of the minibus received injuries and were taken to the Georgetown Public Hospital where they were seen and examined by doctors on duty.

Chan-a-Sue and his wife were admitted in the male and female surgical wards respectively while the two minibus passengers were treated and sent away.

2021-10-30
Denis Chabrol
Previous: Guyana, Barbados agree to cooperate in a range of businesses
Next: Police Force instructed to craft “integrity and ethics plan” to measure performance