Guyana, Barbados agree to cooperate in a range of businesses 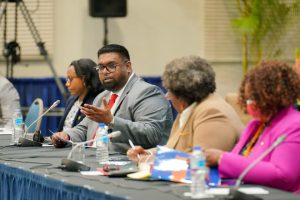 He said the two sister Caribbean Community (CARICOM)-member nations have agreed to establish a “gold market hub” for the sale of jewellery mainly to tourists. “Barbados is a major cruise destination and we are working on the possibility of adding value to Guyana’s gold and creating a gold marketing hub concept in Barbados,” he said. He said the governments would set the policies, including incentives and tax incentives, while the private sector would be the “key drivers.” “In Barbados, for example, you have some capacity in the craft of jewellery making. In Guyana, we have capacity so we have to now expand that capacity because we have to create a win-win situation,” he said.

The Guyanese leader said he and Barbados’ Prime Minister Mia Mottley also discussed the possibility of selling local wood in that Caribbean island nation as well as having exchange counterpart representatives in each other’s Ministry of Agriculture to facilitate easier approval and trade in agricultural produce, as well as addressing sanitary concerns.  The two regional leaders also discussed how an initial total of 6,000 Guyanese could be trained in various aspects of the hospitality industry at Barbados’ premier specialised institution. “Why we have to move aggressively with the 6,000 Guyanese now is because we have a lot of investment in the hospitality sector that is coming and we need to have the technical capacity, the human resources to manage and to work in those hotels and so on that are coming so the need for training is immediate,” he said.

Guyana and Barbados have already reached agreement on the weekly allocation of 45 minutes airtime on each other’s broadcasting station to market their tourism products as part of the twinning of the two destinations for the joint marketing in traditional and non-traditional markets.

Also down on the agenda of the governments of the two nations is the likelihood of a Guyana-Barbados food terminal as well as the allocation of specific port space to reduce the cost of transportation, increase efficiency and reduce the cost of items.

“Prime Minister Mottley and I committed to a time-frame through which the results of this enhanced partnership will be felt by the population of both countries,”  Dr. Ali said.