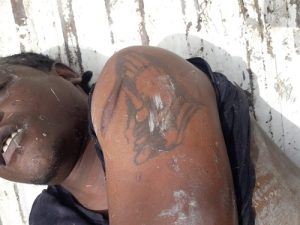 One of three robbers drowned on Saturday after they jumped into a canal at La Bonne Intention (LBI), East Coast Demerara to escape from residents who were enraged by the theft of more than $500,000 in jewellery, other valuables and cash, police said.

His body was later identified by his mother at a mortuary as  that of 22-year old Shamar “Tanny” Charles who was unemployed and resided at 43 Plantain Walk, Triumph Village , East Coast Demerara and Agricola, Greater Georgetown.

Police said a search was conducted on his person and a red bandana, two gold rings, $980 and a University of Guyana  student identification card and a black Pro cellular phone were found in his possession. The two gold rings and the UG Student ID card were identified by the victims as their property, police added.

The two other suspects have not been arrested.

Police were informed that the eldest of the three women was sitting in the lower flat at her dining table, when one of the suspects entered the lower flat from the opened door. He reportedly approached her and demanded cash and jewelry. The two other suspects – one of whom was armed with a handgun – entered the lower flat, assaulted the first victim and demanded cash and jewellery, police added. Investigators were further informed that she then took off the two rings and gave it to him and started to scream.

The other victims said they were in the upper flat, went downstairs and the gunman then took the second victim to the upper flat and demanded more valuables.

The third victim was relieved of her gold chain but she managed to run out the house and alerted neighbours who raised an alarm.

The three suspects ran out of the house and exited the yard by jumping the fence and ran west on foot while a burgundy motor car whose registration number was unknown drove off west on the street.