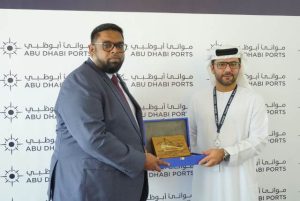 The United Arab Emirates said it is eyeing Guyana to set up a  deepwater port to serve as a hub for the oil and gas sector in this country and neighbouring Brazil, a decision that has prompted  President Irfaan Ali to offer incentives to the company named Abu Dhabi Ports.

“Thank you for that trust. We are serious about Guyana, and I promise you we passed the time of thinking, now we are in the implementation stage. So what you will see today is the capability of Abu Dhabi Ports,” Chief Executive Officer of Abu Dhabi Ports and owner, operator, developer and regulator of Abu Dhabi’s maritime infrastructure and Khalifa Industrial Zone (KIZAD), Mohamed Juma Al Shamisi said.

Dr. Ali, who is currently attending the Dubai Expo 2020 in the UAE, committed his government to providing incentives for the development of the proposed deepwater port. ““We are ready to work with you on having that deepwater port ready for not only Guyana but for the region. And for the most important strategic positioning for the UAE in South America, the Caribbean—in Latin America. I think we could just think about it as an upscaled Panama [Canal] development,” the Guyanese leader said.

President Ali made the statement while visiting Abu Dhabi Ports’ ultra-modern temperature-controlled vaccine storage warehouse facility.  The venue is also the home of the Hope Consortium at KIZAD and the Khalifa Port.

Guyana, Suriname and French Guiana are all part of proposed natural gas pipeline to Brazil to produce energy.

With more oil discoveries in the Stabroek Block offshore Guyana, officials expect that at least three to five more Floating Production, Storage and Offloading vessels would be  brought on stream within the next five years.

Currently, Guyana has one major shorebase and several smaller facilities. CGX Energy is currently constructing a shorebase on the Corentyne River, even as two large tracts of land in West Demerara have been leased to build  two other shorebases.

The President was joined by Sheikh Ahmed Dalmook Al Maktoum of the UAE and representatives of the Guyanese private sector as well as Government Ministers. The Sheikh, who visited Guyana last year November, has featured  as a key figure in the procurement of more than 200,000 doses of the Sputnik V COVID-19 vaccine for this country.

The opposition coalition of A Partnership for National Unity+Alliance For Change had questioned the transparency of that vaccine deal.