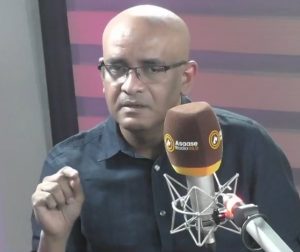 Vice President Bharrat Jagdeo has said that Guyana would eventually have to import labour to construct major infrastructure projects onshore that are increasingly being required to support heightened oil production offshore this South American nation.

Speaking on Asaase Radio during his just-concluded visit to Ghana, West Africa, he said that Guyana needs at least US$40 billion in infrastructural investment in  allied facilities, hotels and real estate to support the growing number of Floating Production, Storage and Offloading vessels.

To avoid the overheating of the economy because already Guyana’s capacity is “limited” but the demand is “massive”, he said government would have to bring in labour from overseas. “We have a small population, limited labour force; we’d have to carefully, at some point in time in the future I think we’d hit full employment so we may have to consider an active immigration but careful immigration policy. That is how you expand your capacity so when demand grows and you have limited capacity, then you have overheating,” he said.

The Vice President said if Guyana spends more on infrastructure, the country does not have sufficient experts and other personnel to implement all of the projects. “So we’d have to import a lot of those capabilities through foreign contractors and foreign expertise so these two have to be carefully calibrated,” said Mr. Jagdeo, a former Finance Minister.

Across in the United Arab Emirates, President Irfaan Ali on Tuesday morning told the media that he was keen on having joint ventures with the  large Guyanese private sector delegation and make sufficient allowance for local content. “We’re hoping that they’ll be matching with other private sector operatives from the UAE, they’ll be making connections and building partnership to make use of the opportunities back home and to ensure there is local content,” he said.

Guyana has developed a local content policy, but is yet to introduce promised related legislation to the National Assembly.