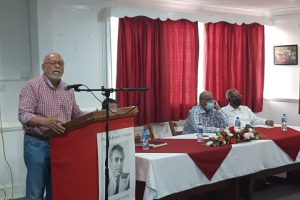 Former President Donald Ramotar addressing a symposium organised by the Cheddi Jagan Research Centre under the theme “October 5: Celebrating 29 years of Return to Democracy in Guyana”.

Former President Donald Ramotar is worried that big international businesses could have a say in taking away his People’s Progressive Party Civic (PPPC) parliamentary majority in future elections under the system of Proportional Representation (PR).

He noted that since the 1992 general elections and right up to the 2020 general and regional elections, political parties are “mushrooming” with as much as 11 that contested last year’s polls. “That is very dangerous situation for us because, with the size of some of the powerful transnational corporations that are now coming to this country, when you take into consideration you need approximately 5,000 votes to get a seat in parliament, the danger exists that control of our parliament can go out of our hands,” he told a recent forum to mark his People’s Progressive Party’s (PPP) contribution to the return of electoral democracy in October 1992.

Historically, the PPP has always accused the West, big business and the media of conspiring to destabilise it in government.

Ramotar had led a minority government in the 65-seat National Assembly where the combined opposition of the People’s National Congress Reform-led A Partnership for National Unity and the Alliance For Change had clinched 33 seats to outnumber the PPP by one seat.

At the 2020 general and regional elections, three small parties- A New and United Guyana, Liberty and Justice Party and The New Movement- had garnered sufficient combined votes to secure one seat under the joinder system that was used for the first time in Guyana.

Mr. Ramotar cautioned that the role of multinational corporations in Guyana’s politics could frustrate the real building of a national democratic state. “Already it is being frustrated. It could be further frustrated and could even be destroyed in some ways,” he said.

Mr. Ramotar, whose PPP has historically claimed that it had been engineered out of office by a British and American conspiracy to change from first-past-the post, castigated the proportional representation system has one that entrenches racism. He said that despite social and economic policies under the PPP, the election results do not reflect the performance. “Look at what the PPP has done in every area of this country. It should have brought far more results in easing the problem of racism in Guyana. Why hasn’t it done so? Because PR has entrenched racism; that the PNC organises on the basis of racism and they have succeeded in planting in the minds of the African Guyanese that this government…and our PR system is the system that is keeping racism alive,” he said.

While conceding that first-past-the post had been cited as being to the PPP’s electoral advantage, he said evidence was there to show that gradually more Afro-Guyanese had been shifting back to the PPP under that system. “The party itself was much more multiracial than it is today,” he said.  He noted that of the 34 PPP top and middle leaders who had been detained, 11 had been Afro-Guyanese.

The PPP Executive Committee member reasoned that the PNCR benefits from attacking the PPP on the basis of racism, but recommended that the only route of Guyana’s race-based quagmire is to pressure that party into eschewing partisan postures. “We have to do something to force the PNC to take more strong national positions and not racial positions because they have not been taking national positions,” he said.

Mr. Ramotar said the PNC had not taken national positions in the fight for Guyana’s independence, and the origin of the Venezuela’s border claim.

According to the Marxist-oriented Ramotar, he analysed that a return to the constituency electoral system would push the PNCR away from racial partisanship. “While I wouldn’t say that the constituency system would solve all of these problems, it will force the PNC to take a more strongly national position to compete on the basis of more broader questions and not only to feel that they guarantee their full support by preaching race and consolidating racism within the society,” he said.

Executive member of the PNCR Aubrey Norton has been stridently criticising the PPP’s policies, his most recent position being against the $250,000 to retrenched sugar workers. He said that was yet another example of the PPP enriching its supporters in the same way that it has done with the cash payout to flood-hit farmers.

The opposition has also repeatedly accused the PPP of sacking thousands of Afro-Guyanese government workers because they were either perceived as or were in fact opposition supporters. On the flip-side, after the Indo-Guyanese backed PPP had lost the 2015 general and regional elections, it had levelled similar charges against the PNCR-led coalition administration of David Granger