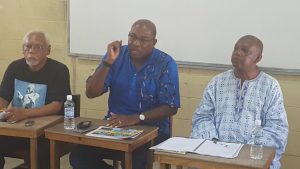 Former Chairman of the Alliance For Change and a Director of the Guyana Oil and Gas Association (GOGA) has warned that oil companies could fund election campaigns in exercising leverage over the country’s political landscape.

Attorney-at-Law, Nigel Hughes, who was a panelist at a session on the oil and gas sector at the just concluded 5th conference of the pro-Afro-Guyanese Cuffy250 Movement, argued that oil companies’ sole priority is to ensure that governments could help them extract crude oil to reap huge profits.

Noting that an election campaign in Guyana costs less than US$8 million and might possibly increase to US$10 million by 2020 to fund advertisements, flyers, concerts, he said that would be an easy investment for an oil company.

“If I am sitting down and I am a billionaire in the world and I want to control the oil that’s coming out of Guyana because the resources they have found here are the largest they have ever found in the last 20 years, it would take me nothing to take 15 million (US) dollars, create a political party or back a political party and I will then own the natural resources of the country so you can be bought, ladies and gentlemen, or your leaders can be bought for as little as 10 million US dollars,” said Hughes, a prominent Attorney-at-Law who has been paying very keen interest in the oil and gas sector. 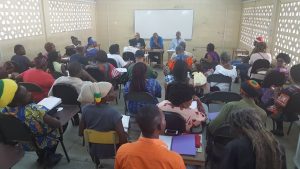 Attorney-at-Law, Nigel Hughes (centre) flanked by Dr. Norman Ng-a-Qui (left) and Eric Phillips at the head table in the background interacting with participants in the oil and gas workshop at the 5th Cuffy250 Conference.

Hughes warned the gathering of more than 50 persons in that session not to become gullible and instead be on their guard for concerts and games. “All of this is going to be very cheap for the oil company and it will guarantee that it has government under its control,” he said.

Demerara Waves Online News has been told that top officials of one of the prominent parties in the governing coalition are concerned about the possibility of oil company financing of the 2020 elections campaign to ensure that a preferred candidate emerges and wins the presidency.

ExxonMobil, which is expected to begin commercial oil production in 2020, has not hidden the fact that it funds political activities in the United States and Canada but has added that it does so under strict guidelines in those countries.

ExxonMobil has already denied funding the 2015 general election campaign in Guyana  which does not have campaign finance legislation.

The GOGA Executive Member reasoned that the only defence that countries like Guyana have is greater transparency to allow Guyanese to openly reject agreements signed by government.

The Guyana government has said it has been advised that it would not be wise to make public the agreements between ExxonMobil and Guyana at this time due to the unresolved border controversy with neighbouring Venezuela.

Minister of Public Infrastructure, David Patterson said last week that the Petroleum Act, which includes a secrecy clause, is being reviewed and  tabled in the National Assembly before year-end so that it would mirror laws in other petroleum producing countries. “I am sure the final product on the table will be more reflective of petroleum producing countries,” he said.

ExxonMobil continues to discover hundreds of millions of barrels of oil offshore Guyana from where it would start commercial pumping from the Liza 1 well which has almost 500 million barrels of light sweet crude.