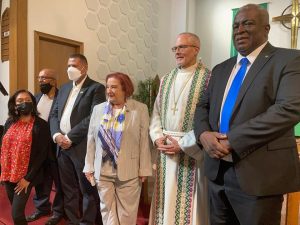 Minister of Governance Gail Teixeira on Sunday said the local economic and global political conditions are right for national unity rather than leaving the door open to division by external forces.

She told congregants at the New Haven  Ministries, Richmond Hill, New York that Guyana no longer needed to fight each other on the basis of race and class, but instead to take advantage of the conditions to maximise potentials in agriculture, mining, climate change mitigation and its newly-found oil wealth.

“Guyana has no time more for that. We’ve done it, been there and it has held us back. We need, now, as a people to get out act together. All the things now have conspired to be in our favour – our geography, our resources, oil and gas, the international goodwill,” she said at one of many multi-religious stops at places of worship in New York.

The visits to churches and a temple  were streamed live by Little Guyana-592 News .

The Minister of Governance said Guyana could not squander the goodwill that has been earned at the “highest levels” of the United Nations (UN), Commonwealth, Organisation of American States (OAS) and the Caribbean Community (CARICOM). “We can’t mess it up. Everything is is in our favour now and, therefore, one of our major challenges is how do we create one Guyana where we don’t allow people to come in and divide us (but) hold our heads together and love each other,” she said.

The UN, Commonwealth, OAS and CARICOM as well as the United States, Canada, United Kingdom and the European Union had all agreed that the results from the national vote recount had been good enough to form the basis to declare the results of the March 2, 2020 general and regional elections.

Ms. Teixeira suggested that time has come for Guyanese to work hard in the land of their birth in the same way they have been doing in other countries and grooming their children into being highly qualified.

“This is the time for Guyana. All the different variables have come together, now that we have the potential,” she added.

Prime Minister Mark Phillips, who has been long tipped to head a proposed ‘One Guyana Commission’ said that with Guyana now being  the richest country per capita in Latin America and the Caribbean, it is time for all the political parties to work together to transform Guyana. “Now is the time for development; now is the time for our government to be working with all of the political actors on Guyana to help Guyana realise its dreams of the development of all the people and we recognise the important role of religion because it’s through religion we were able to maintain that hope and that aspiration for a better Guyana,” he said.

Addressing one of several religious congregations in New York, home to hundreds of thousands of Guyanese migrants, neither Ms. Teixeira, Housing and Water Minister Collin Croal nor Prime Minister Mark Phillips made no mention of the need for the People’s National Congress Reform (PNCR)-led opposition coalition to first recognise the government as legitimate before political talks are held.

The fan-out by the mainly Indo-Guyanese backed top People’s Progressive Party Civic (PPPC) administration officials has comes almost two months after the Afro-Guyanese-dominated opposition coalition had dispatched many of its elected and non-elected officials on a campaign to the US to reinforce its accusation of racial discrimination.

In recent months, the Guyana government has found itself having to fend off suggestions by Democratic Congressmen that the Irfaan Ali-led administration needs to do more to ensure there is inclusivity and that all Guyanese should benefit from Guyana’s oil wealth now estimated at 10 billion barrels of oil equivalent.

In remarks to congregants at the New Haven Ministries, Housing and Water Minister Collin Croal sought to assure that there is no discrimination in the allocation of house lots.  He said lands are being allocated based on the length of time applicants have been waiting and other criteria but not race. “We do not discriminate. We cater for every every level of society,” he said.

Mr. Croal earlier Sunday told those gathered for Sunday Service at the Our Savior Lutheran Church in Jamaica, Queens that so far 7,000 house lots have been distributed to Guyanese since the PPP returned to office in August 2020. He said another 1,000 lots would be distributed next week.

The Guyanese delegation wooed the Guyanese in New York to play a role in Guyana’s development through virtual fora and Online teaching, if they prefer to continue residing in the United States.