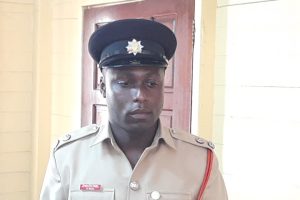 The Guyana Fire Service (GFS) on Thursday said that based on evidence collected from the scene and statements from detainees, investigators have concluded that that the fire that destroyed the Brickdam Police Station was as a result of arson.

“At this point, it is concluded that the supposed cause of the Brickdam Police Station fire was suspected arson,”  Chief Fire Prevention Officer, Sheldon Sauns told reporters.

Contrary to police, he said none of the 16 detainees, who were held at the Brickdam lockups, confessed to setting the fires. Police, however, said Clarence Greene confessed voluntarily on video that he set the fire to the building by lighting a piece of sponge and pushing it through a hole of the cell with a piece of wire. “It was said that the prisoner gave a confession statement, but I also had an interview with the prisoner so that would have been the following day….That was not given in his statement,” he said.

Chief Fire Officer Gregory Wickham added that certain confidential information could not be released to the public. 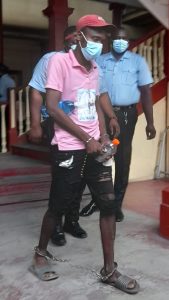 Greene was arraigned Friday afternoon a charge of setting fire to a building belonging to the State. He was not required to plea to the indictable charge.  He was remanded to prison until October 28.

Mr. Sauns was hard pressed to state what the tests conducted on paper and some of the wood that was left of  the building  led investigators to conclude that the fire was arson, though he seemed to rely heavily statements from “some of the prisoners who were there.” “Persons were interviewed and coming out of those interviews, feasible information was gathered, coupled with the samples collected, which would have led us to our conclusion,” he said. He said no sponge was found but part of a cigarette lighter was retrieved from around the fraud section.

The Chief Fire Prevention Officer said the investigation was “a coordinated effort” by the Police Force and Fire Service. He defended the decision to start removing the debris while the investigation was ongoing. He said it is the Fire Service that is the sole authority that gives approval for fire scenes to be cleared. “We would not give permission for them to clear a scene if that fire scene was not thoroughly investigated; it makes no sense,” he said.