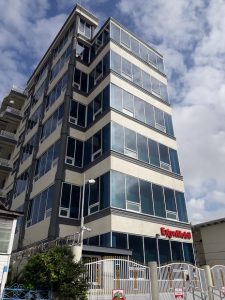 ExxonMobil’s local subsidiary was Monday added as a defendant in a case brought by two Guyanese who are asking the Guyana High Court to order the closure of that American supermajor’s operations here because of its impact on the environment.
Justice Frank Holder, after hearing submissions by lawyers for Dr. Troy Thomas and Quaddad De Freitas, decided that Esso Exploration and Production Guyana Limited (EEGPL) “ought properly to be added as it had a material interest in the proceeding and its outcome.”  EEPGL’s majority stakeholder is ExxonMobil, with the others being Hess Corporation and China National Offshore Oil Company (CNOOC).
Dr. Thomas and Mr. De Freitas are alleging that  that their constitutional rights to a safe and healthy environment have been contravened by the Guyana Government’s entering into several petroleum agreements with EEGPL and its parent ExxonMobil Corp, as under these agreements, EEPGL will produce large quantities of petroleum which when burnt, would create large amounts of greenhouse gases which would in turn, cause climate change making Guyana’s environment unsafe and unhealthy.

Dr. Thomas and Mr. De Freitas had strenuously objected to EEPGL being a party to the case, instead preferring the Guyana government, represented by the Attorney General, to be the lone respondent.

Attorneys for Dr Thomas and De Freitas have conceded that if EEGPL was to participate in limited scope the Court had a discretion to allow this.
Justice Holder has fixed certain timelines for documents to be filed by the respective parties on support of their cases, and for further steps to be taken in the matter.  It is now adjourned to June, 2022 for case management in the High Court.
The Attorney-General the Hon. Anil Nandlall, SC, appeared for the State with Mr. C. Devonish State Counsel.  Mr. Andrew Pollard, SC, Edward Luckhoo, SC, and Ms. E. Luckhoo appeared for Esso.  Mr. Ronald Burch-Smith appeared with Ms. Melinda Janki for the applicants.