Executive member of the People’s National Congress Reform (PNCR), Aubrey Norton has rebuked President Irfaan Ali for spouting untruths that there had been no extra-judicial killing of Afro-Guyanese under the  previous People’s Progressive Party Civic (PPPC) administration.

“When the president of Guyana stands in front of reporters and claims Guyana never had a problem with extrajudicial killings and we cannot go back to what never happened, he lied,” said Mr. Norton in response to the President’s claims.

Mr. Norton’s PNCR has not issued a statement on the President’s remarks, but in his comments  that were reposted on his party’s Facebook page, he lists at least 13 persons who were allegedly killed by police between 1999 and 2021.

The President came in for scathing criticism by Mr. Norton after he sought to debunk accusations by the opposition that the police shooting death of Essequibo Coast businessman, Orin Boston on September 15 had marked the return of extra-judicial killings under the People’s Progressive Party Civic (PPPC) administration. 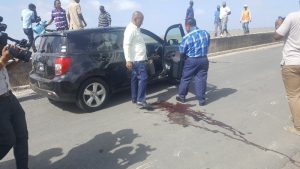 The blood just outside the car shows where one of the suspected bandits was shot dead by police. (FILE PICTURE March 15, 2018)

Mr. Norton used the opportunity to again level charges of racial discrimination by the PPP administration such as the dismissal of about 900 persons because of their race and perceived political association.

On the change of government in Guyana, both the Afro-Guyanese backed PNCR and the mainly Indo-Guyanese supported PPP have accused each other of getting rid of employees because of their race or perceived political affiliation.

The then David Granger-led administration had eventually backed off from a promise to conduct a Commission of Inquiry into what he had termed the 1992-2008 period of the “troubles” saying that there had been insufficient evidence.

Under his administration, police had shot dead three suspected robbers near the Georgetown seawall in March 2018, but only one firearm had been found near the body of one of the persons.  An inquest had been promised.