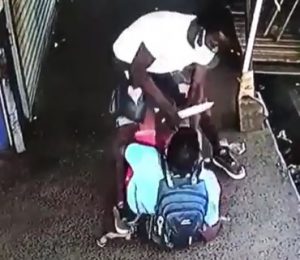 Hours after an off-duty policeman was robbed at knife-point outside Muneshwer’s Hardware Store on Water Street, Georgetown, a suspect was arrested and the haversack believed to have been stolen was recovered, the Guyana Police Force said.

The law enforcement agency said the suspect was arrested at about 5:30 PM at High and Hadfield Streets, Georgetown and the haversack has since been identified by the victim as his property.

Police said the uniform has not been recovered.

Police did not disclose the name of the suspect, but said he is 21 years old and lives at GUYHOC Squatting Area.

“At the time he had in his possession a blue haversack which the victim subsequently identified as his own. The suspect remains in custody pending charges,” police said.

The two began to scuffle, before falling to the ground where the suspect cut away the haversack with the other items and made good his escape, police said.