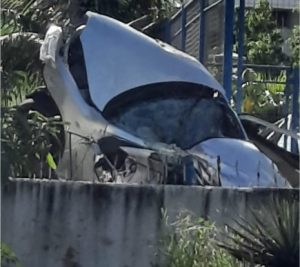 A Guyana Defence Force (GDF) Corporal early this morning crashed the car into a bill board on the Rupert Craig Highway, flipped several times and ended up in the Russian Embassy compound, police said.

The car was being driven by 42-year old Dwayne Samuels, who is stationed at Camp Ayanganna and resides at 297 Bachelor’s Adventure, East Coast Demerara.

Investigators said he was driving motorcar, bearing licence registration marking PYY 991, at a fast rate of speed west along the northern drive lane on Rupert Craig Highway when the driver lost control while attempting to navigate the Russian Embassy turn turn.

“As such the vehicle collided into a billboard situated on the western parapet, continued to proceed further in a western direction and collided into a concrete block. The motorcar then flipped over the concrete fence, where it came to a halt in the Russian Embassy compound,” the Guyana Police Force said.

Police said firefighters and emergency medical technicians removed Samuels, who was in a semi-conscious condition, and rushed him to the Georgetown Public Hospital Accident and Emergency Unit, “where he is currently being treated by doctors on duty in a stable condition.”