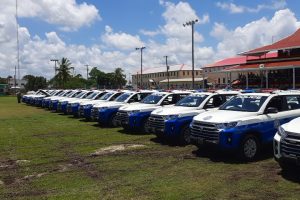 President Irfaan Ali on Monday scolded the Guyana Police Force for doing a poor job in maintaining its fleet of vehicles, in an address at the handing over of a fleet of 50 new pickups worth more than GY$200 million.

“I want to be frank with you. We support the work of the police force and will provide it with the resources needed but the force needs to take better care of its transportation equipment. The provision of resources must be accompanied greater responsibility in their use and care,” he said at the event held at the Police Force Sports Club Ground, Eve Leary. The Musso pickups are made by the South Korean company, Ssangyong.

Declaring that “this cannot continue,” he recalled that four years China had donated 56 pickups, five buses, 35 All Terrain Vehicles (ATVs) and 48 cycles, but today 39 of the vehicles are working., with 101 down for repairs and a number of them already unserviceable.

He said efforts were underway to procure engines for those Chinese-made vehicles. Sources have indicated that the Chinese company has since shut down, making it virtually impossible to source spares.

President Ali lamented, by accounts from the public, and his own observation of vehicles at private mechanic shops  how members of the Guyana Police Force have been abusing those modes of transportation. “The public is appalled at the level of misuse and the reckless driving of many of the force vehicles,” he said.

Dr. Ali said training programmes would be held to manage vehicles and other assets of that civilian law enforcement agency. “We will have to do an assessment of the capability to manage these assets and to find a way that is more reliable, efficient and less costly that will deliver the results in managing these vehicles,” he said.

He called on the policemen and women not to use the vehicles for “joy rides” but instead boost its response to crime-fighting.