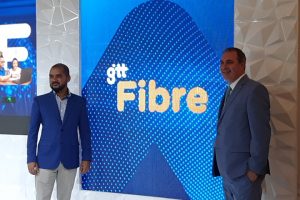 The announcement was made at a news conference by GTT’s Chief Executive Officer Damian Blackburn. He says on top of the GY$17 billion that has already been spent on fibre-optic cable Internet service, the company has invested more money in  upgrading its data services. “This is the start of a series of new commitments we will make deliver on our promises,” he said.

The Chief Operating Officer of GTT’s Fibre to the Home and Fixed, Ishwar Thakurdin says several aspects of the telecommunications provider’s operations have been upgraded. They include cabinets, installing higher capacity cards after determining their status. “Before doing all of that, we had to do a major audit of all the cabinets and infrastructure across Guyana,” he said.

The GTT Chief Executive Officer says more fibre optic cables are being rolled out and the submarine cable is being upgraded. “The other thing that we have also had to do is to upgrade our subsea transmission links to the Internet so Guyana’s connectivity to the Internet and to other countries… to make sure we’ve got enough bandwidth for the traffic,” he said.

The GTT Blaze service has been rebranded as GTT Fibre that the company says will provide new and existing customers at lower costs. The new plans, the company says, are fiber 50, 100 and 150 more than double the speeds. The company said DSL customers would also get higher data speeds.

Mr. Blackburn boasted that Guyana is much further ahead of many other Caribbean countries in its fiber rollout because of GTT.

GTT says it has already improved its response by training and hiring more customer service representatives, reconnecting customers immediately after they have paid, and introducing WhatsApp billing.